The 5 Loudest Fanbases in Baseball 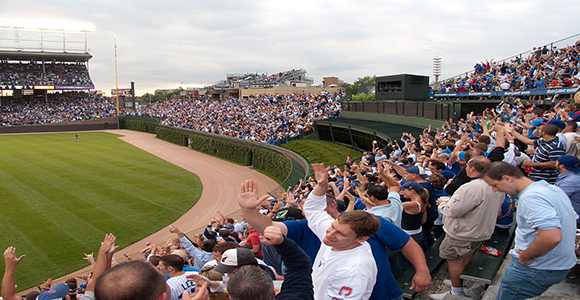 For many, baseball's opening day traditionally marks the annual rite of passage from winter to spring.  And despite colder than normal temperatures throughout most of the country, baseball fans are heading to the ballpark today to root for their favorite teams. We thought it would be fun to take a (mostly) unscientific look at what we and others* thought were the loudest fanbases in Major League Baseball.

Long suffering Cubs fans routinely pack in Wrigley Field to support their "lovable losers." Visiting teams and fans are familiar with the infamous "Bleacher Bums," who spent most of the game sitting in Wrigley Field's bleachers and heckling opposing outfielders.

Arguably the world's most famous professional sports team also has some of the most vocal fans. A recent move to the posh new Yankee stadium has appeared to temper the fan base, as many of the expensive seats behind home plate now sit empty.

From booing Santa Claus, to throwing batteries onto the field, Philadelphia fans are not afraid of voicing their displeasure. Luckily in recent years Phillies fans have had plenty to cheer about, including a 2008 World Series Championship.

Okay, perhaps  a "homer" pick for the team closest to Starkey Hearing Technologies' corporate headquarters! However, there is no denying that the former home of the Twins, the Metrodome, was one of the loudest in the history sports. In fact, during the 1987 and 1991 World Series, peak decibel levels were measured at up to 125 - comparable to a 747 taking off!

The reigning World Series Champions are well-known for having some of the loudest and rowdiest fans, particularly during their recent playoff runs. In fact, national sportscaster and World Series play-by-play man Joe Buck even declared Giant's AT&T Park the "loudest I have ever been in" during the 2012 World Series!

Whomever you root for this year, make sure to consider taking hearing precautions when you go to the ballpark. This recent article in Yahoo discusses an interesting  research study performed by Bill Hodgetts (University of Alberta's Faculty of Rehabilitation Medicine) and Dr. Richard Liu (Faculty of Medicine and Dentistry). They measured noise levels at games 3, 4 and 6 of the Stanley Cup finals against the Carolina Hurricanes in 2005 and found that it took under six minutes to achieve the maximum allowable daily dose of noise volume.

Author Jilliata Horton makes an interesting point, "Just like you'd wear sunscreen to protect your skin while at the ball game, a cap to shield your eyes from glare, mittens to keep your hands warm, a scarf over your nose, and so on, why should earplugs be excluded from your arsenal of body protection?"

Something to think about as we bring in another exciting year of baseball.

Do you wear hearing protection to sporting events? Have a gripe with our rankings of loudest fanbases? We would love your thoughts!