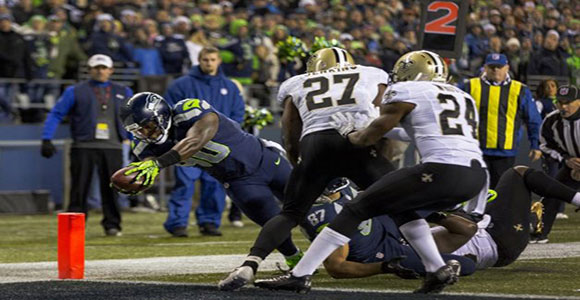 While Broncos quarterback Peyton Manning and Seahawks cornerback Richard Sherman have gained most of the media attention leading up to Super Bowl XLVIII, at Starkey Hearing Technologies we are most inspired by the story of Seahawks running back Derrick Coleman.

A hearing aid wearer since childhood, the 23-year-old Coleman was fitted with Starkey’s Wi Series aids in 2012 when he was a member of the Minnesota Vikings.  The team’s Winter Park headquarters is less than a mile from Starkey Hearing Technologies Eden Prairie World Headquarters.

Coleman’s story gained national attention recently when a battery commercial he starred in went viral. The ad, which depicts Coleman’s time being picked on as a child to his rise as an NFL player, has amassed more than 13 million views online.

The story picked up additional attention last week when the father of two New Jersey girls with hearing loss tweeted a “thank you” letter they wrote to Coleman. The next day, Coleman tweeted a letter back to the girls thanking them for their support. On Thursday, just three days before the big game, Coleman surprised the girls and their family on national television with tickets to the Super Bowl.

During Super Bowl media day, Coleman talked about how his Starkey hearing aids have impacted his performance on the field. “I always use a scale from zero to 10, zero being completely deaf and 10 being perfect hearing,” said Coleman. “About eight, nine, 10 is everybody else – normal hearing. Without my hearing aid, I’m probably about a two. With my hearing aid, I’m probably about six, seven, eight, depending on the day,” Coleman said.

When he is away from the field Coleman enjoys visiting schools and spreading his inspirational story to young people. With his increased attention, the second year pro has gladly accepted his newly earned status as a role model for those with hearing loss.

“What I’m doing now, getting the opportunity to play for the Seattle Seahawks and getting the chance to play in the Super Bowl, that’s basically saying that when people are hard of hearing now, you can do it too,” said Coleman. “They’re not going to be saying you can’t do it because you’re hard of hearing. I’m making that step. That’s why I go and talk to a lot of kids, because when they start making excuses and being lazy and people start getting that perception, they’re going to come to me thinking I’m the same way. Everything I do affects them and everything they do affects us.”