How to make hearing aid popsicles 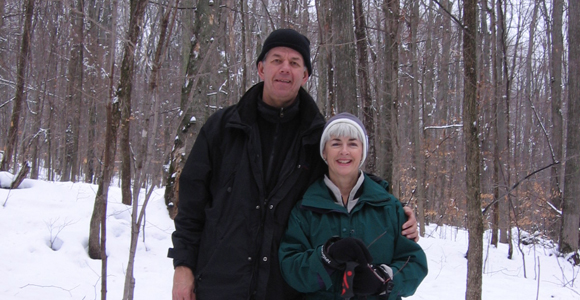 Gael and her husband, Doug.

The following is a guest blog post from Gael Hannan, originally posted on Hearing Health Matters on Jan. 5. Gael is a writer, actor and public speaker who grew up with a progressive hearing loss that is now severe-to-profound. She lives in Toronto with her husband and son.

I have a question for those of you who wear things in your ears. And I don’t mean on your ears like earrings and hats and such, I’m talking in your ears—hearing aids, specifically. Have you ever put them in when they were cold? Really, really cold?

If not, you’re lucky. It’s not a pleasant sensation plugging little popsicles in your ears. The feeling is hard to describe—not as bad as someone’s cold hands grabbing your warm neck, or stubbing your bare toe on a sharp table leg. More like a small electric shock, but colder. Our warm ear canals are simply not used to this sort of glacial violation.

The Hearing Husband and I are currently camping in California, and the other night as we slept, the outside temperature dipped to zero degrees (0º Celsius= 32º Fahrenheit). This would not normally be a problem because Flag, our camper, has a furnace and our bed has micro fleece sheets. We also have Nicky, a heat-loving cat, who, when the air gets nippy, crawls down under the covers to snuggle between us and we all share body heat.

But in the middle of the night, the propane ran out and the furnace stopped working. Doug decided to stay warm and deal with it in the daylight, and I don’t know how to change the tanks. Even when it was light enough to see our breath in the air, we delayed getting up as long as we could before starving to death. Just because we’re Canadian doesn’t mean we like being shivery cold, and leaving the warmth of bed meant freezing floors and icy toilet seats. Finally, Doug grit his teeth and shimmied outside to change the propane tank, but if you’re feeling sorry for him, don’t. His discomfort was nothing compared to my physical shock at the coldstabs when I inserted those auricle popsicles. They were so cold that, frankly, I was surprised they even worked.


As the camper and I warmed up, I started to worry. Would dropping to a low temperature actually be harmful to the inner workings of my ear-babies? In researching my blog “What I Didn’t Know About Hearing Aid Batteries”, I knew that the lifespan of batteries is shortened by low temperatures and that experts recommend storing batteries at room temperature. But what about the hearing aid itself? I don’t recall ever seeing one of those medicinal warnings: Do not store at temperatures higher than 86ºF or lower than 58ºF, although to be honest, I’m one of those people who impatiently tears packaging off without taking the time to read the small print or instructions. But since hearing aids are extremely important to my mental, physical and social well-being, I am more careful with my hearing aids than with most other things I own.


The renowned Dr. Mark Ross, in his article Hearing Aid Troubleshooting, which first appeared in a 1999 article for Self Help for Hard of Hearing People (now the Hearing Loss Association of America), said that hearing aids don’t like temperature extremes. “Damage incurred from high heat or cold may adversely affect a hearing aid’s performance. Much of this damage is caused by the changes in temperature, which causes a condensation of moisture within the aid, rather than the temperature itself [my underline]. This change can occur many times a day, as someone goes from hot to air-conditioned comfort and back again.”


Well, whaddaya know? It never occurred to me that temperature fluctuations could be a threat to the inner workings of hearing aids, but apparently the resulting condensation is as dangerous as humidity and human perspiration. In my blog written after my November visit to Yellowknife, Northwest Territories, I wondered whether the cold weather (-30ºC, -15ºF) would affect my hearing aids. But they didn’t falter, bless them, perhaps because they were in my ears, which I kept warmly covered with a parka and scarf. As I spent almost no time outside in the extreme temperatures, there would have been little cause to worry about the dreaded condensation.


So, I’m hoping that the temperature fluctuations of the other day were minimal, because even before I inserted those electronic popsicles, my ears were already damn near frozen. Perhaps my ears and aids adjusted together, slowly, taking warmth from each other – like me and the cat. This may not be how it works, but it’s a nice thought, don’t you think?

But just in case, I religiously fight against moisture by keeping my hearing aids in a dry-aid when I’m not wearing them. And all the Hearing Husband has to do is keep Flag supplied with propane, because I would prefer not to make any more hearing aid popsicles.