The Goff Family: My Daughter Shea 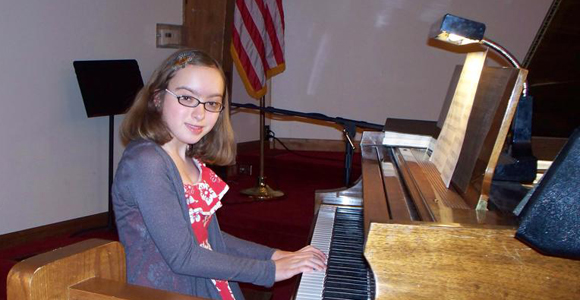 This month we were honored to highlight an incredible family, the Goffs, on our blog and in our quarterly hearing industry magazine, Innovations. Kerri Goff is a talented writer, and we asked her to continue to share her family’s story and unique challenges in a follow-up blog post series. Be sure to take a look at the first blog post to read about her children Shea and Colton’s amazing hearing journey. This week, we’ll learn a little bit more about 13-year-old Shea!

My daughter Shea (pronounced Shay) entered the world six weeks too soon and weighing only two pounds, eight ounces. She was severely small for gestation due to a malformed umbilical cord and placenta. She entered this world crying and kicking – she sounded like a little kitten that was hollering mad. She spent the first 26 days of her life in the Neonatal Intensive Care Unit. As a toddler she had gross motor, fine motor and speech and language delays, which required countless hours of physical, occupational and speech therapy. Shea struggled to meet her developmental milestones; she could not sit up on her own until she was 1 and did not walk until she was 2. She was frequently sick and common illnesses like a 24-hour stomach virus would put her in the hospital for days at a time as she would dehydrate easily. This was very scary as she did not have extra pounds to lose. Shea has always been very tiny for her age. Even now, she is 14 years old and weighs about 80 pounds and is only 4’ 8”. Due to some of her medical issues, it is not likely that she will grow any taller than she is now.

The name Shea is Celtic and means “fairy-like and admirable” which suites her quite well. Despite her size, Shea has always had a strong will and an incredible sense of determination. She is very bright and also musically talented. She plays violin and piano and she has what appears to be “perfect pitch.” But, like many other kids who are deaf or hard of hearing, she is a little shy and slow to warm up to people. If you really want to get to know Shea, you have to make the effort and earn her trust before she will let you get a glimpse of her knowledge, wit, and her funny but dry sense of humor. She is a good judge of people and she knows instantly who really has her best interest at heart. And she is brave. I frequently tell her that she is braver than most adults I know.

In addition to physical developmental delays Shea also has a lot of other chronic and/or reoccurring medical conditions including Chiari Malformation, Klippel-Feil Syndrome (KFS), Tethered Cord Syndrome (TCS), Congenital Scoliosis, Cardiac Heart Block, and likely Ehlers Danlos Syndrome (EDS). She has had nine surgeries to date, including spinal surgery, brain surgery and multiple ear surgeries. Most recently, she has presented with borderline hypertension that is likely a result of the Chiari Malformation. Shea also has a bilateral moderate-to-severe hearing loss.

Shea was born hearing but lost some early in childhood, most likely between the ages of 1 and 3 years. We do not know the exact cause of her hearing loss, but it is likely due to a combination of low birth weight/premature birth, Chiari Malformation and connective tissue disorder, called Ehlers Danlos Syndrome. As an infant, Shea experienced chronic ear infections and ruptured eardrums despite multiple sets of tubes and attempts at reconstructive surgery. Her doctors have stated multiple times that she has “extremely poor middle ear function.” We were completely surprised to learn about Shea’s hearing loss as she was doing well in school and she could also speak and articulate clearly. But looking back, I now realize there were signs such as her speaking in a very low tone of voice, pragmatic language (social language) delays and also what her teachers thought to be defiant behavior.

She was 7 when we learned that she was hard of hearing. We were at an appointment with a new ENT and the pediatric audiologist suggested that Shea have access to an FM system in school to help her hear the teacher’s instruction. At the time, I was completely ignorant as to how hearing loss affects a child’s education. I naively expected that our local public school system would be able to advise us as to what accommodations Shea would need. I could not wait to meet with Shea’s teachers because I had information that would help them to help her. I told them about her hearing loss and asked that they begin using the FM System while giving classroom instruction. Her teachers kind of glanced at one another and then one of them stated, “Shea can hear when she wants to.” I was completely surprised and I am sure that my mouth dropped wide open. Her other teacher then said, “I really think you should get a second opinion.” I picked my jaw up off the floor and said, “This was a second opinion.” She then said, “Well, that was a doctor’s opinion; she needs to be seen by the educational audiologist at the school district.” Being new to the world of what I now refer to as DHH (Deaf and Hard of Hearing) Education, I agreed, because I did not know what else to do. And I half paid attention as they continued on with the meeting discussing Shea’s progress and also her “strong will and lack of motivation.” I left frustrated and confused, with the name and number of the educational audiologist in hand. Was I making too much of this? Was a hearing loss really a big deal? It’s not like she is deaf, right? I made an appointment with the educational audiologist and she confirmed for the teachers what I already knew, the report read “Moderate-to-severe bilateral hearing loss, requires amplification with use of FM and would greatly benefit from hearing aids.”

To this day I am amazed at the lack of awareness about the unique educational needs of deaf and hard of hearing children and students. My husband and I had no clue where to start. I can only describe our mindset as “we did not know what we did not know.” And the teachers at our school did not know, and neither did the speech therapist nor the principal. And the doctors never spoke to us about deaf and hard of hearing education. One thing that I did know was that my little girl was very smart, but she was also struggling. She had developed incredible compensatory strategies that she used to try and function in a general education classroom. It was no wonder she was so exhausted at the end of each school day. She had to work twice as hard because she missed at least half, if not more, of the instruction. After her teachers had a better understanding of Shea’s challenges, they watched her more closely and admitted that she was constantly looking at the other kids to see what they were doing and then she would do the same. In addition, she had developed excellent lip reading skills. All of this had become her normal.

Finally, the day arrived for Shea to get her first set of hearing aids. They were on loan from our local ISD. I guess there was a small part of me that wondered if they would really make much of a difference. So we decided to let her test them before purchasing them ourselves as hearing aids were not a covered insurance benefit. Shea had previously been fitted for her earmolds and she had chosen clear with blue sparkles. She thought they were pretty cool looking but was not sure about putting them into her ears. Eventually with a little help, she had one side in. When the audiologist turned it on, I saw my daughter’s eyes widen with surprise and wonder. She could now hear clearly. I sat in awe as the audiologist did some additional testing and had her repeat some words back to her. Then someone opened the door quietly, but it squeaked and Shea turned around a little startled as if to say, “What’s that?” I thought to myself, “Just how much has she been missing?” And I fought back the tears as they continued to explain to her how to change the battery, and take care of the hearing aids, and then they sent us on our way. Shea and I were both quiet on the drive home until she said, “Mom, I like these hearing aids. I can hear everything so much better.” I could no longer hold back the tears as I said, “I am so glad baby, I am so glad.” I wanted to apologize to her for not knowing. How could I not know that my child had a hearing loss? But, I did not know what I did not know. After making sure that the volume on the stereo was not too loud for her, I realized that I was speaking to her in a normal tone of voice and she could hear me. I also realized that I too had developed my own compensatory strategies because I was used to turning my head and speaking or yelling very loud to her in the back seat of the minivan so that she could hear me. It had become my normal.

This was the beginning of our hearing loss and hearing aid journey as a family. A journey that was far from over and that would take a few crazy, scary and wonderful twists and turns.

It is a journey that we are still on today.