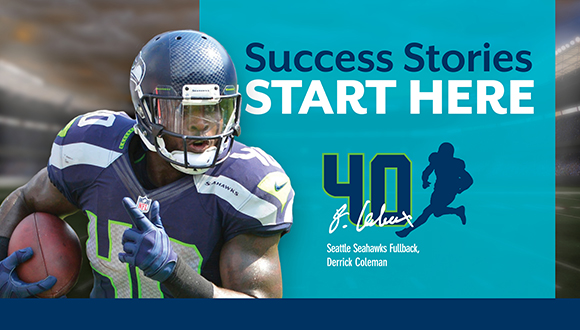 When Derrick Coleman became the first legally deaf offensive football player in the NFL to win a Super Bowl title in early 2014, he catapulted into the national spotlight. Hearing loss, the health condition Derrick shares with millions of Americans, became the focus of national media attention. On the field Coleman relies on hand signals, lip reading and two powerful hearing aids made by Starkey Hearing Technologies.

He explained his decision to partner with Starkey in an article on Next Impulse Sports:

“The way Starkey reached out to me when I first went to Minnesota as an undrafted NFL player is the same way they reach out to everyone else … The Starkey Foundation is amazing. I have had several youth and young adults Facebook message me or tweet me regarding their special need for hearing aids, and without asking Starkey stepped in and made their dreams a reality.”

Derrick is most revered for his role as an advocate for those with hearing loss, especially children. Thousands of children with hearing loss follow Derrick on Facebook and Twitter, admiring his tenacity and fortitude. To many, the Super Bowl ring he wears represents success and overcoming obstacles. Derrick openly shares his personal triumphs and defeats, masterfully creating a community of like-minded people focused on hope and inspiration. Despite his many commitments, Derrick takes time to personally respond to the posts his fans share. Everyday moments, including a hit at a tee ball game, a tackle in a peewee football game, or a new set of hearing aids are shared among the fans that follow Derrick’s pages. In an age where most celebrities seem aloof and self-indulgent, preferring to maintain distance from the very fans that create their success, Coleman is refreshingly different. He remains relatable and accessible, drawn to the personal stories of hope and inspiration from his smallest fans.

To show his support of the hearing loss community, Derrick  serves as a  hearing ambassador, helping to support the efforts of Starkey Hearing Foundation and Starkey Hearing Technologies by attending missions and encouraging healthy hearing habits. Last year, Coleman ran a Facebook contest in conjunction with Starkey Hearing Technologies to give away a pair of hearing aids to a deserving person. Of the more than 150 people who commented sharing why they’d like to give – or get – the gift of hearing, one high school student was chosen at random to be fit. His mom wrote in her submission,

“My son was diagnosed with moderate hearing loss in both ears at age 12. He plays offense just like Derrick and watching the Duracell commercial was so familiar. We struggled with many of the same issues. Football is what keeps this kid motivated.”

The famous Duracell commercial she is referring to has been viewed more than 23 million times on YouTube alone. The commercial depicts the struggles Derrick faced, being teased as a child and then being passed over in the 2012 draft, he explains, “They told me I couldn’t do it. I couldn’t live my dream. But, I’ve been deaf since I was three, so I didn’t listen.”

The commercial has been an inspiration to many, but for one award winning director who tried to hide his unilateral hearing loss for decades, the video did more than just inspire him, it helped him face his fear of correcting his own hearing loss. Rik Cordero explained to complex.com (http://www.complex.com/pop-culture/2014/01/derrick-coleman-audio-tech) that, “Derrick’s Duracell commercial made me realize that I shouldn’t be ashamed of Single Sided Deafness (SSD), or feel the need to mask it with passiveness. Hearing impairment is nothing to be ashamed about, in fact it’s made me who I am. The uncertainty, the tears, the support of my family has put me into a position where I today.”

To more than 35 million deaf and hard of hearing individuals Coleman embodies excellence both on the field and off. As a decorated player who excels at one of our nations favorite past times he amazes many by remaining humble off the field. He is known for his hard working and professional work ethic. Professional athletes often make headlines for misconduct and bad behavior off the field, but Coleman is refreshingly different, splitting his time between fullback and running back for the World Champion XLVIII Seattle Seahawks. Refusing to let his hearing loss define him, or limit his abilities, Derrick rose above the challenges of his childhood. It is easy to see why the success of  #40 has inspired a generation of young people.

To learn more about Derrick, read our past blog posts on his experience being fit with Halo Made for iPhone hearing aids and his No Excuses attitude.