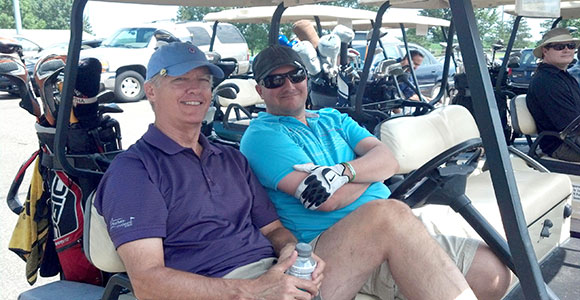 Growing up in Minnetonka, Minnesota, Starkey Hearing Technologies graphic designer Chris Bracke has fond memories of being outside with his dad. “Some of my favorite memories with my dad include camping, sailboat racing on Lake Superior, golfing and going to Twins games,” he recalls.

When his dad began to notice a change in his hearing he decided to act quickly. “I think my dad drew upon his own father’s experience with hearing aids, which included prolonged denial followed by a cheap over-the-counter model that didn’t work. Once, he even lost them in a bowl of mixed nuts,” Chris recalled with a laugh. “I remember initially being surprised that my dad went in for a hearing evaluation and even more surprised when he decided to get one. He quickly discovered that not only are the devices small (he wears Xino) but they are infinitely more sleek and stylish than his father’s cashew evoking model!”

Chris continued, “He was fit by the folks at Expert Hearing in Chanhassen. They were extremely friendly and professional. I think he initially underestimated the difference hearing aids would make but it didn’t take long for him to begin to notice a big difference. He absolutely loves hearing better! He noticed that things sound crisp again and the world around him seems more alive. He really enjoys spending time with his granddaughters and going on movie dates with my mom. There is no doubt in my mind that his decision to join the millions worldwide wearing hearing devices is one he feels great about.”

As a Starkey employee, Chris enjoyed being part of the fitting process and seeing what a difference it made for his dad. He has been part of the Starkey family for seven years and this was his first chance to see the transformation better hearing makes from start to finish. He explained, “Being part of the Starkey team has been rewarding for me both professionally and personally. The work done by the Starkey Hearing Foundation has a lasting impact on everyone it touches. As a designer it is rewarding that Starkey takes their marketing seriously and invests in the proper resources. It results in materials our designers can be proud of, which is one of the most rewarding parts of my job at Starkey: the people. The group of creatives I work with challenge me, inspire me, laugh with me, and grow with me.”