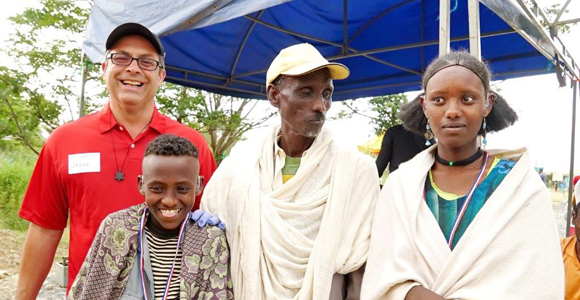 This October, Jason Horowitz, manager of national sales for NuEar, (a Starkey Hearing Technologies brand) joined Starkey Hearing Foundation for its Ethiopia hearing mission. It was Jason's first time attending a mission so Foundation co-founder Tani Austin suggested he take a little time each day to journal his experience providing the gift of hearing. After arriving home and sharing his journal, Jason said, "I always knew what we did was special, but now I really KNOW!"

We're excited to share Jason's hearing mission journal with you, the first of three parts below!

I left the U.S. from Washington Dulles airport at 12:15 p.m. and undertook the longest flight of my life. The flight was 13 hours; I have never sat that long before! I took the opportunity to eat as often as I could, rationalizing that the upcoming offerings may not be as palatable. I watched movies, worked on my laptop, read, slept. At last, we touched down at Addis Ababa Bole International Airport on Tuesday, September 30 at 8:15 a.m.

Due to our flight being delayed out of the U.S., we missed our connecting flight to Axum. We proceeded to customs, rebooked our flight and tried to secure a hotel for the night. The climate was comfortable, 75 degrees and clear. We considered a taxi, but we opted for a hotel shuttle vehicle instead. Another member of the team emerged as our "travel negotiator," and I was quite pleased, as he had much more international travel experience than I do. After some unsuccessful negotiations attempting to get a room, we eventually opted for a hotel at the airport at no cost. The accommodations were not spectacular but I was grateful to have a roof over my head and the opportunity to sleep in a bed. We treated ourselves to a beer at the hotel bar to end our night.

We woke at 5 a.m. and made our way down to the taxi to the airport. The flight was only about two hours and we landed at the Emperor Yohannes IV Airport (Axum Airport). Another mission team member was there to greet us and shuttle us to the hotel, our home for the next day and a half while we worked in Axum. Bill and Tani Austin arrived, and Tani invited Jeremy (Swanson, Director of Regional Sales at Starkey) and me to her room to help indoctrinate us for the mission. Her instruction was clear and light-hearted. I could immediately sense her passion, and it was contagious.

We headed directly over to the mission site. The drive was an eye-opening experience. The roads were rougher than I was used to, and I struggled to understand the “rules of the road.” Pedestrians seemed to have equal rights to the middle of the road as the cars, as did the cattle, goats and donkeys. The cars and tuk-tuks (three-wheeled auto rickshaws) never slowed down for them, and we whizzed by them with a few inches of margin. This was quite unnerving for me, but neither our cabbie nor pedestrians seemed fazed by it.

Finally we arrived at the mission site; it was a gated entrance facility that was a school for nurses-to-be. The line of people waiting to get in was extremely long. There were elderly men dressed in garb I've never seen. Some had elaborate hats, cloaks and walking sticks. There were women in colorful saris with veils. The young children and students were dressed as you'd expect to see in America. It was a sight to see. We unloaded from the taxi and walked down to the fitting area, where considerably more patients were already waiting. There were six tented areas where patients were screened: one for hearing loss, one for otoscopy, the next for infection or perforations, the fitting area, a troubleshooting area for difficult fits and a post-fit counseling area. I was to work in the fitting area. I shadowed Foundation team member Eric for a good half-hour watching him stretch tubes, turn aids on and utter, “Ba-Ba-Ba” many times in each ear. The objective of a fitting is to determine if the sound is too soft, too loud and ultimately the most comfortable level.

The next morning, we left the hotel at 8 a.m. and made our way to the mission site. There was a long line of hopeful patients at the gate already. The Foundation uses radio to announce its presence three days prior to arrival and the method is quite effective. I didn’t participate in the screening process, but I learned how it is done and recorded a few sessions with my phone. It is a difficult job to say the least. Most people have legitimate hearing challenges due to chronic infections, ototoxic effects of drugs to combat malaria, congenital losses, trauma and meningitis amongst other reasons.

Our fitting day began, and I worked for four hours on fittings. Some fittings were extremely rewarding as I saw the light of joy in the eyes of children, parents and the elderly early in the fitting process. Others were more difficult as I struggled to get the correct fit. In some of most extreme cases I was able to get the assistance of Tani and Bill, as they have years of experience on missions and somehow were able to find the perfect fit!

That night, we went back to the Axum airport where we flew to Mekele for the next arm of the Ethiopia mission – to be continued!