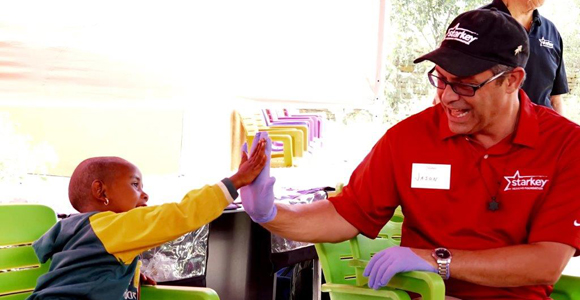 This October, Jason Horowitz, manager of national sales for NuEar (a Starkey Hearing Technologies brand), joined Starkey Hearing Foundation for its Ethiopia hearing mission. It was Jason's first time attending a mission so Foundation co-founder Tani Austin suggested he take a little time each day to journal his experience providing the gift of hearing. After arriving home and sharing his journal, Jason said, "I always knew what we did was special, but now I really KNOW!"

We're excited to share Jason's third and final mission journal entry below. If you missed the earlier posts, be sure to check out Part 1 here and Part 2 here!

We left to the mission site at 8 a.m. and the set up was considerably easier than the previous day as the stations were already ready to go and we simply carried the tables with molds out from the schoolroom to the tent. We fit patients from 10 a.m. to 5:30 p.m. I had one patient that I will never forget. Ironically, it was my last patient of the day. She was a young woman who had some form of physical ailment. Her hearing loss was identified as profound. Her left ear was dead; it had no response at Level 10, Volume 4. I started the fitting process, as a formality, on her right ear. You have to start at the lowest amplification, as they may have asymmetric loss, but often it’s an effort in futility and only exacerbates the frustration of the patient as you climb up each level of amplification and they derive no benefit. As a matter of safety and respect to the patient and process, you must fit this way. When I reached Level 6 and Volume 3, she began to writhe in her seat. Had I over amplified? Did a bee sting her? Why was she gyrating so?

Due to her physical issues she couldn’t look up at me. So I kneeled down to assess her condition. She was crying. “What had I done wrong?” I wondered. Then my field of vision widened. Just beneath her teary eyes was the broadest smile I had seen to date. Our eyes met and it was clear her tears and physical excitement were an extension of her joy. She was hearing! You could have knocked me over with a feather. She was hearing well and repeated each sound I made with complete accuracy. I choked up, tears welled up in my eyes and I cried with her. The combination of my expectation of failure, combined with her exaltation and appreciation were more than I could bear. I made a difference for her.

It was overwhelming to say the least. I brought her over to Bill to verify the left ear loss. He confirmed the settings, and we sent her to counseling after several hugs. She didn’t want to leave me. In fact, after counseling she came back to me for more hugs. It chokes me up just to write this.

That evening Bill and Tani took the entire team out to dinner at a local restaurant. When I say the entire team, not only do I mean the 25 or so people affiliated with the Foundation, but also all the local Ethiopians who had been assisting us with translation and set up. What a generous and lovely gesture on the part of the Austins. We had a lovely buffet set up for us and the food was outstanding. Local dignitaries were there as our guests as well and they took to the microphone to honor Bill and Tani. After the remarks were concluded, they gave Bill a plaque and a carving of the Obelisk of Axum as tokens of their appreciation. Then the musicians began to play music and Bill and Tani were the first to lead in dance. The music was very lively. After a while, I started to find my stride. Perhaps the wine helped. It was a lovely evening and without a doubt, quite fun. This was well beyond my usual bedtime, so I was glad when Bill pulled the plug and we abruptly left for the hotel. I was tired!

Jeremy and I joined the team for their AfterCare meeting. It was an eye-opening experience. I had no idea the scope or the magnitude of what the Foundation is, or how much planning goes into it. It is a well-oiled machine. The level of detail is astounding. They have methods, protocols and processes for nearly everything. There are three phases involved in missions and certain people are responsible for certain countries. There are directors who live in the areas we visit who are the “feet on the street” who help coordinate every minute detail. At the meeting, contributions came from every member at the table. They pour over the details of the intake forms, the follow-up data, the logistics and plan for several missions simultaneously. They were making plans for missions over a year away. I suppose I should not be surprised, as this is parallel to the experience I have in the sales department, however, I am amazed at the coordination of the efforts. Each person has a tremendous amount of autonomy and responsibility and somehow it all comes together.

We headed to the mission site for our final day of fittings. I have become painfully aware that I am the worst fitter here! We (as a team) even enjoyed a light-hearted laugh about it at this morning’s cheer. However, Bill, in a very serious and compassionate way, did not let the moment pass without comment. He reminded us that it takes different talents, temperaments and convictions to make the world go round. We each contribute our talents in a different way to make the world a better place. I was so touched that his compassion radar was so wide, that he wanted to reassure me. I suppose I shouldn’t be surprised; He is the living embodiment of compassion. I appreciated the gesture more than he’ll ever know.

I fit many patients today and had better outcomes than previous days. I also received wonderful assistance from Doug and Beth McMillin who are Audibel (a Starkey Hearing Technologies brand) customers and longtime friends of the Foundation. Doug helped me resolve three fittings I couldn’t figure out. I realized that when you are struggling to find the answer, reaching out to those around you is the smartest thing you can do. The patient I will remember today was a young man (18 years old) who came alone. He was quiet and somewhat shy. He did not speak and was signing with my translator. The screening identified his loss as profound and I feared the worst for him. I was surprised when he responded well to Level 4 aids with a Volume 3 setting. When I say respond, I don’t mean a subtle reaction. It was like a different person emerged. He straightened up, his eyes grew wide and the smile exploded. It’s the smile that grabs your heart – it is the affirmation that at that moment in time I have irrevocably changed someone’s life for the better.

I was a bit melancholy towards the end of the day, as I was growing accustomed to the people I was working with and appreciating the work we are doing. It is addictive to be within proximity to people of passion. My radar has grown from the very small world I live in to include a wider appreciation for the world, and the challenges that many people face just to exist. I realized as we fit over 900 patients, I only saw one patient with glasses (as I wear them). This was an epiphany for me as I am certain that every person we saw didn’t have 20/20 vision. They simply live with blurred vision. I could hardly function in the world with my challenged vision, yet many of these people do in addition to poor hearing. They don’t have some of the technology and creature comforts that many of us take for granted. Their priorities in what they value, and rightly so, are in the relationships with the people in their lives.

As we drove around town and to and from the mission sites, I saw people walking with their arms around each other. Man to man, woman to woman, brother to sister. It was a wonderful realization and reminder of the importance of connecting with people. It’s what makes the gift of hearing so precious. I have sat in offices in the United States and helped fit patients. Certainly, they appreciate the gift of restored hearing, but not like these people do. Here it is unexpected and appreciated beyond belief. In Ethiopia almost everyone I fit flashed a wider smile than I had ever seen. They bowed to me; they hugged me and kissed me. Their loved ones did the same. I will never forget the experience; it has changed me for the better. It has “amplified” my awareness of the world, the things that should be prioritized in life, how precious hearing is and how wonderful the company I work for is. Not a bad way to spend a week!