Hearing From Our Veterans: Hearing ability and the military 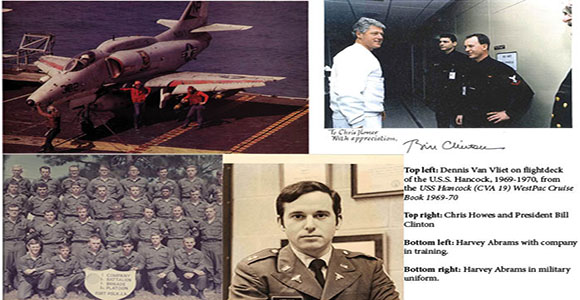 Military personnel are extremely susceptible to hearing loss and tinnitus. During training and service, they can be exposed to loud, damaging noises such as artillery rounds, exploding bombs, helicopters and planes and more. And there are often combat situations when taking the time to put hearing protective devices in could be a life or death decision.

We caught up with some of Starkey’s veterans and asked them the following questions about their own experiences with hearing in the military and how hearing can affect a soldier’s ability to perform and survive in various situations.

My role in the military was that of a clinical audiologist, hearing conservation officer, and advisor on issues related to noise and hearing protection in the Hearing Conservation Branch, Bioacoustics Division, U.S. Army Environmental Hygiene Agency. I was not involved in combat operations. I was the first audiologist ever assigned to Ft. Campbell in Kentucky. At the time, the hospital was a World War II-era structure, and the only audiology equipment available when I arrived was a Beltone Audiometer from the mid 1960s. While challenging, we did our best to treat the many servicemen from the 101st Airborne Division returning from Vietnam.

Good hearing is critical for mission success and personal survival. There are four mission-critical functions in which hearing plays a vital role: communication, detection and identification, localization, and acoustic stealth. Hearing loss can negatively impact any one, or any combination of these functions, placing the individual, his or her unit, and the entire mission at risk. Not wearing hearing protection poses a risk of noise-induced hearing loss, which compromises those four critical functions. Ironically, conventional hearing protection devices (HPDs) can pose the same risks as hearing loss. The challenge is to develop (and use) HPDs that are acoustically transparent in quiet but provide protection in response to high levels of impulse noise (e.g. weapon fire). Several HPDs that meet these requirements are currently available. Military personnel who are exposed to predictable and continuous noise from such sources as fixed wing or rotary aircraft or armored personnel carriers, for example, have special communication headsets that protect both the head and hearing.

As the hearing conservation officer at a major military training post, I was responsible for educating the troops concerning the dangers of noise and the importance of wearing hearing protection. I was also responsible for conducting annual hearing tests, identifying changes in hearing, and ensuring that the troops were properly fit with HPDs. Later, when I was assigned to the U.S. Army Environmental Hygiene Agency, I was responsible, along with my colleagues, with developing and monitoring the Army-wide hearing conservation program.

Awareness for the importance of hearing protection is not the problem. As a matter of fact, servicemen and servicewomen know it is in their best interest to protect their hearing as significant changes in their hearing ability can adversely impact their military career. The challenge, as noted above, is to provide effective hearing protection that does not compromise those four critical functions described earlier. Each military branch has their own hearing conservation program. Detailed information concerning the Army’s program can be found here.

I actually spent most of my six years in the Navy in a hospital ENT clinic doing a wide variety of hearing tests and working in the operating room. I’m very familiar with hearing conservation programs, as I would see the service members who failed those screenings and needed more in depth testing.

My hearing was critical in the operating room to be aware of the surgeon’s requests to provide the correct instrumentation and to hear over the equipment like drills. Hearing could be a challenge in the operating room, as you don’t get the visual cues since we’re all wearing surgical masks. It was critical that you listened carefully to hear everything that was going on when at times there could be four to six people around the patient and noisy equipment.

Hearing orders at a critical time in training or actual combat can make the difference between life and death. I used hearing protection if any event was noisy. This was during shooting practice and when I worked as part of a flight crew for helicopters landing on our hospital ship delivering patients.

I did mostly audiology and was able to test the hearing of presidents and other dignitaries. Bill Clinton was interesting but my favorite was Astronaut/Senator John Glenn

Communication is extremely important in the military. Organized units can work together safely and effectively only if there is good communication. In situations where distance or noise interferes with hearing, alternate modes of communication have been carefully developed to preserve communication. Since new recruits typically have good hearing, most compensation is related to the situation.

Much of the time I spent in service was on the flight deck of an aircraft carrier. Hearing in extreme noise is a challenge, and requires extreme compensation strategies. We wore full protection while in the flight deck: helmets, earmuffs and inflatable vests. Even though it was late in the 1960s, nearly 50 years ago, we were well informed and aware of hearing protection.

The flight deck is very dangerous in a number of ways, but as a result it is carefully controlled. Not every situation can be controlled in the wide array of military service, but service members can be prepared to adapt to the situation and protect themselves while doing the job.

I was in the active Army for three years and then in the Reserves and National Guard for 14 years. I was a mechanic and worked on light and medium duty trucks and drove a heavy recovery tracked (tank) vehicle, but I don’t have any combat experience.

From the beginning of basic training, hearing protection was enforced and supplied. We were issued hearing plugs, fit to the size of our canals. We wore them on our uniform, to be used at any time and used them whenever necessary including in wheeled or tracked vehicles, in the maintenance shop and during rifle qualification. But, we were relatively young, new to the environment and didn’t think anything could or would harm us.

We wore our earplugs during rifle qualifications (40 shots) and in the shop. We had access the headphone-style protection in the shop. These were easier to use as they could be placed around our necks when not in use.

When driving our tacked vehicles, we wore our CVC’s. These were protective helmets with a microphone and speakers. This did three things:

1)    Protected the head from bumps

2)    Allowed communication with the track commander

Once, I did a rifle qualification without hearing protection and made it through about 10 shots. I was able to place empty cartridges in my ears because of the rifle sound and ringing by then. My ears rang for a day and I had a headache for a day. After that I was extremely conscious of using hearing protection.

One needs to be able to hear actions and communication in their surroundings. If one needs to use their rifle, they may not have time to put hearing protection in. From one to many, many shots may be fired. By this time, one’s hearing has been affected. Analogy: All the police shows show officers wearing hearing protection during a rifle or pistol qualification. Body or dash cam videos that show officers firing their weapons, don’t take the time to put hearing protection during a confrontation. They may have an earpiece in one ear for communication in the radio; the other ear is open to hear their surroundings.

Hearing was essential as there was nothing in place for those with hearing loss. Orders are given orally, often over radio, on the flight line. It would be virtually impossible for a person to function on the flight line without hearing.

As a crew chief, we had to communicate to the cockpit via a headset attached to a cord that was plugged into the side of the fuselage. We had to have voice communication even when the engines were running at 100 percent. I guess we had to hear well enough to discern a human voice over the background noise of the engines.

Looking back at my U. S. Air Force experience, at the time it didn’t seem like anything to worry about. We were young and healthy. We wore government issued earplugs and earmuffs for working on the flight line. But, when I was with New Hampshire Air Guard there were folks that had been working on the flight line for over 20 years. Hearing loss was common – one poor fellow had the nickname, “Huh?” because he had been exposed to the high frequency noise of the jet engines for far too long… probably didn’t wear ear protection at all times, and he always answered with, “Huh?” I can only guess that his hearing loss got worse after he retired. That was the extent of the “education” we got about hearing loss.

This is “back in the day,” but we trained for chemical warfare in full chemical warfare suits. That training prepared us to survive in the event of a chemical attack. Why not have folk that are working on the flight line, and other high noise areas, train under hearing loss conditions? Have them try to communicate without hearing, or very low ability to hear, by somehow blocking the ear canals. This would make the experience of hearing loss real.

Thankfully, I was never in a casualty situation and due to the nature of my position, I did very little casualty training. My hearing was and still is excellent. We had hearing screenings yearly. Whenever we were on the flight deck we wore double hearing protection. I don’t remember if this was mandatory or if we did it simply so our ears would not ring after being out there. Double hearing protection consisted of foamy earplugs and then earmuffs over our ears, and the noise was still getting through. Personally, I think anyone with a job associated with aircrafts should have custom hearing protection to wear under the earmuffs.