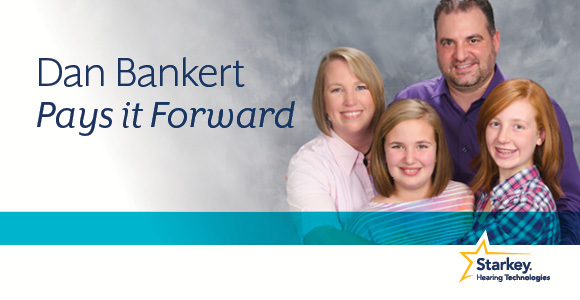 Dan Bankert’s wedding date was June 25, 1994. The night before, his hearing aids stopped working and left him with half of what was already limited hearing. “I’d been wearing hearing aids for over 20 years at that point,” Dan said. “I knew that I needed my hearing aids to hear.”

His dispenser was in northern California, while Dan was far south in Marina Del Ray. “It was horrifying,” he said. “I was going to have half of my limited hearing on the most important day of my life! I called my dispenser and he said Starkey Hearing Technologies had a facility about an hour away. He said he’d call them and see what he could do, because the facility wasn’t set up to receive customers. It was for production or manufacturing or something.”

That night, Starkey Hearing Technologies did Dan a favor he’s never forgotten. “I drove to the facility, someone met me on the shipping dock, walked me in, and I stood there and watched them fix my hearing aids on the spot,” he said. “Within 30 minutes, I walked away with fully functioning hearing aids. My wedding wouldn’t have been what it was without Starkey … because that is not standard procedure. I mean customers aren’t allowed to just go to facilities and say, 'Fix this for me.' But that’s what they did.”

Now, more than 20 years later, Dan sought out Starkey Hearing Technologies once again. But this time it wasn’t for repairs.

“They’d done me this incredible favor 20 years ago, and I just felt like I had to say thank you somehow.”

A Hearing Aid Childhood
Dan was born with hearing loss, but it went unidentified until he was 4 when he got a hearing test with his older brother. They found he had a pretty severe loss; a hearing loss that they feared would get worse as Dan continued to grow. “They thought I was going to go completely deaf, so my mom had to decide right there and then if she was going to mainstream me or not,” Dan said.

“I couldn’t speak very well as a child … I spoke like a lot of deaf kids do, in a monotone, but they’d give me flashcards to practice with,” he said. “I’d go home every day after school, stand in front of the mirror with the flashcards and practice for hours. I didn’t just want to overcome my handicap, I wanted to crush it.”

Dan has what is called a reverse-cookie-bite loss that results in a “U” shaped audiogram. At 1000Hz he has a 90dB loss and has a lot of trouble with hearing mid- frequency sounds, many of which are used in conversation. He has worn hearing aids since he was a child.

“Hearing aid technology 40 years ago isn’t where it is today,” he said. “My first hearing aid was the size of a Sony Walkman and was wired in. I can still recall adjusting the gain on my hearing aids in college with a teeny, tiny screwdriver.”

Because of his hearing aids, Dan was teased ruthlessly as a child. “I couldn’t speak well and had these ugly things in my ears,” he said. The clear tubes on his behind-the-ear (BTE) devices and his earmolds, which filled his outer ear, would both turn a disgusting yellow as they aged.

“I was a bright kid, but I couldn’t communicate well,” Dan said. “Because I was teased so much, I’d turn my hearing aids off so I didn’t have to hear them. I’d do it with my teachers, too, and say ‘Oh, my hearing aids aren’t working; I guess I can’t do school today.’ My mom figured it out and had to teach my teachers how to turn on my hearing aids for me.”

Despite the bullying, Dan is thankful the California Children’s Services was able to provide hearing aids for him. “If they hadn’t, I wouldn’t have the life I do today,” he said.

Dan said he probably went through about four or five pairs of hearing aids before college. While he was in college, he bought the best hearing aids he could find. He needed maximum power and the most innovative technology. He can recall his transition from analog hearing aids that he manually adjusted to digital ones he could program.

Today, Dan is a frequent public speaker and experienced technology executive. He is currently the Director of Customer Experience, Global Support and Services at Mentor Graphics in Portland, Oregon, and is a founding member of the Service Revenue Generation and Managed Service disciplines at the Technology Services Industry Association. Communication is key for Dan, both in and out of the office, but he said clarity has always been more important.

Dan and Starkey Hearing Technologies Meet Again
As part of his endeavor for more clarity, and a desire for Bluetooth capabilities, Dan looked at the Z Series™ hearing aid family from Starkey Hearing Technologies.  He was fitted with Z Series completely-in-the-canal (CIC) hearing aids that are completely invisible to the naked eye. He also has a SurfLink® remote with a built in microphone that he uses to control his hearing aids in situations like large work meetings and enjoying entertainment while traveling away from home.

“I wanted Bluetooth for a long time, and it had been in the BTEs for awhile, so that’s why the Z Series were so interesting to me,” he said. “When I originally moved to CICs, I’ve never forgotten that moment the first time someone said, ‘Oh, I didn’t even know you wore hearing aids!’ Imagine me growing up getting teased with these ugly hearing aids … I became emotional because I was so touched that they didn’t even know I had hearing aids or hearing loss.”

“Now with my Z Series hearing aids I walk into the office, stand there and talk on the phone and no one can tell,” Dan said laughing. “People will say, that’s so cool, I want that, and they don’t even have hearing loss. For someone who’s not hard of hearing to wish they had hearing aids, and to hear that as someone who’s had them his entire life because I had too … that was just such an 'ah-ha' moment!”

At work, Dan enjoys the ability to take calls directly to his hearing aids and to use the SurfLink remote in large meetings. With the microphones built directly into the hearing aids, Dan can hear the people seated nearby, and he said by placing his SurfLink remote at the far end of the conference room table, he’s able to hear everyone in the meeting.

The Z Series hearing aids have also improved his life outside the office. “There is a crispness to sound I haven’t heard before,” he said. “I’m able to hear family better in the car. We just did a two-hour drive to the beach, talking and listening to music, and I was able to understand my children more than I have before, and they were in backseat behind me.”

“Every set of hearing aids I get, I end up hearing something I haven’t heard before,” Dan said. “Z Series is another step in the growth in technology.”

For more information on the Z Series product line, please click here. If you are unsure what hearing aid is right for you, contact a local hearing professional near you today.