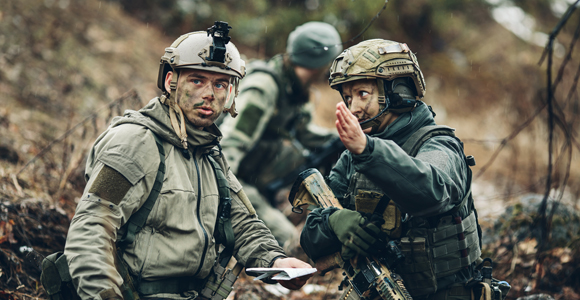 In honor of Memorial Day (May 25), we thought we’d take a closer look at hearing loss in the armed forces. Hearing is necessary whether you’re on flight deck, in the shop, in a command booth or in the middle of combat. And if you can’t hear, it could have serious consequences. Having a hearing loss can significantly affect your ability to perform in a variety of situations and environments and can also determine whether or not you are able to enlist or serve.

Starkey Master Planner and Scheduler Philip Zander had firsthand experience with hearing ability while serving in the Army Reserve from 2000 to 2006. He served in Iraq for nine months in 2003 in support of Operation Enduring Freedom, and he ended his military career as a sergeant. Zander explains how military hearing protection alone isn’t really sufficient in certain situations, especially combat.  “[It] suppresses everything from explosions and weapon systems firing to the man next to you trying to communication with you,” Zander said. “If you wear these, it affects your team’s survivability because you cannot hear your team members. Instead of wearing these, soldiers would wear nothing to allow communication to occur because being able to communicate is the most critical element in a combat situation.”

Zander’s statement on how hearing affects survivability and performance is exactly why auditory fitness evaluations are required when applying for a position in the military. Hearing is necessary whether you’re on flight deck, in the shop, in a command booth or in the middle of combat. And if you can’t hear, it could have serious consequences.

"Typically, auditory fitness for duty is assessed for individuals in jobs that are potentially dangerous or involve the safety of others (i.e., firefighting, law enforcement, operation of an aircraft, etc.). Military Auditory Fitness for Duty (AFFD) standards refer to the hearing thresholds and profiles that will dictate whether a Service member is able to perform his or her duties safely and effectively in the field. One of the main missions of our auditory fitness for duty efforts is to determine what level of hearing is necessary in order for military personnel to perform the requirements of their jobs. "

A recent study by researchers at the University of Southampton analyzed the importance of hearing for soldiers in mission-type situations. Science Daily recently posted an article on the study summarizing the researchers’ findings and discussed the researchers’ next step—an auditory fitness test designed just for military personnel.

Personnel currently serving in the armed forces were asked by the researchers to rank battlefield sounds and commands based on three criterion: how important they were, regularity and how many soldiers hear them while in the line of duty. The results of the study formed an index that the researchers will use to develop a new hearing test. The new test will be engineered specifically for the armed forces and will assess whether or not soldiers have sufficient hearing ability to be effective during combat situations.

Researches identified 17 auditory tasks in previous study. The study was originally published in Noise and Health and defined nine of the 17 tasks as mission-critical auditory tasks (MCATs). The following nine were identified as being essential to accurately hear or do:

According to the article in Science Daily, British medical military examinations use “pure-tone audiometry” which assesses the ability to hear individual tones of different frequencies in quiet surroundings.” Primary author of the study, Hannah Semeraro, said in the article that the pure-tone test is problematic because it doesn’t relate to the real-life circumstances that soldiers encounter during duty.

The plan is to develop and validate “clinical auditory fitness-for-duty tests” that will assess the auditory skills needed to perform while in the line of duty. Semeraro said in the article, "By establishing what soldiers need to be able to hear and react to, and weighting these auditory tasks to reflect operational priorities, we can create an auditory fitness-for-duty test that is related to the scenarios that the soldiers actually experience."

And hearing is absolutely essential for those serving in the military. Read Senior Airman Steven Bryant’s story from 2013 on how hearing affected his ability to survive and perform during a mission as a Pararescueman. The Department of the Army Pamphlet 40-501 for the U.S. Army Hearing Program further details the effect of hearing on combat readiness for both offensive and defensive missions in Chapter 2 Section 9.

For offensive operations, hearing is necessary to:

For defensive operations, soldiers need to be able to hear:

For both operations, good hearing is critical to:

Feel like sharing your own hearing experience while on duty? Share it with us here in the comments section below or email us at social@starkey.com. Want to learn more about hearing loss? Check out our Hearing Loss page.