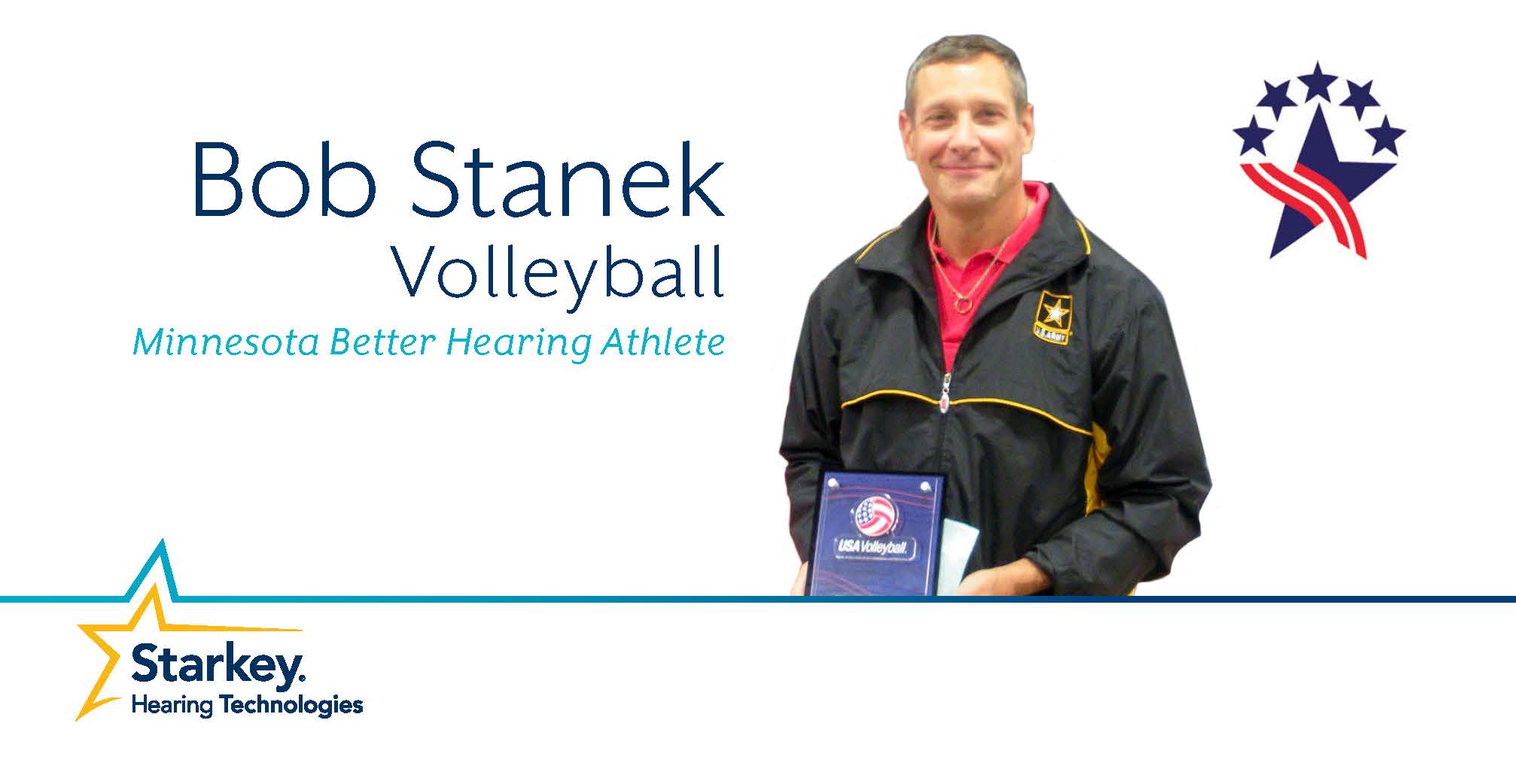 Command Sergeant Major (CSM) Bob Stanek, 58, has been in the Army for 40 years. He’s been playing volleyball for even longer.

Stanek picked up volleyball a little over 41 years ago. While at North Dakota State University, he started playing with a local United States Volleyball Association amateur team and played intramural games that traveled across the northern plains region and southern Canada.

After college, Stanek began officiating volleyball games. “I first got certified to officiate high school and lower level college ball (Division III),” he said. “ Then I got certified to officiate Division I and II level games and pro events.” Stanek said that during a single week, he’d be working with the Army during the weekdays, be officiating volleyball games on weeknights and then play volleyball with his own team on the weekends. He also has served as a scorekeeper for volleyball at the 1996 Olympics in Atlanta, Georgia and a court manager for beach volleyball at the 2000 Olympics in Sydney, Australia.

“I don’t play as much as I used to,” Stanek said of recent years. “But, I’m also traveling on average 25 days out of each month and am now married with two daughters.”

Despite backing off volleyball a bit, Stanek’s skills are still sharp. His team, the Minnesota Masters, is a men’s 50s volleyball team that includes players from across the Midwest, Canada, Venezuela and Brazil.  The team qualified for the 2015 National Senior Games after winning the Minnesota State Games in 2014.

Stanek said what’s funny about his team is that while it started with guys from Minnesota but has essentially evolved into an “international masters’ team.” The players for the National Senior Games this year won’t all be from Minnesota, he said. “The players that can be on our team are required to have played at a qualifying event themselves or with us at a qualifying event,” Stanek explained of why his players geographic locations were so diverse.  “I’ve got a roster of 50 people because sometimes people just can’t make it due to work or family commitments. It’s fun because the team is always dynamic and changing, but it’s also a challenge because it’s hard to make sure the chemistry is right.”

But while Stanek’s physical skills have continued to thrive on the court, the same can’t be said of his hearing. In the last five years, Stanek said he’s noticed a continual decline in his hearing from his military audiograms.

“In 2009, I had to do multiple hearing tests or they wouldn’t let me deploy to Afghanistan,” Stanek said.  “That was the first time it was officially measured, but since then I’ve been able to see the loss.”

Stanek said now his greatest difficulties with hearing loss occur in large groups of people, with high frequency sounds and when lots of ambient noise is present. “Multiple meetings throughout the day with lots of people are hard,” he said. “People will often say something, and I won’t necessarily hear or understand what they said. Sometimes my response isn’t always the right one. I also notice that while I’m home alone, I turn the volume down on the phone or TV, whereas when people are around the house, I end up turning the volume up again.”

In addition to having hearing loss, Stanek suffers from tinnitus in both ears. “It’s worse in the morning, but sometimes it can wake me up at night,” he said of the high-pitched ringing that happens. “During the day it seems to get better or go away, but I’m not sure if I just get used to it or if it’s actually going away.”

To help Stanek listen easier during meetings and in noise, he was fit with Halo™, Made for iPhone® i110 hearing aids.  The hearing aids and Starkey’s TruLink™ hearing control app are engineered to work specifically with his iPhone and enable him to take calls directly.  “I love the iPhone feature,” he said after wearing his new hearing aids for two weeks. “I have talked with it a few times already, sometimes with other people around, and they don’t see my hearing aids on. They look at me weirdly because they can’t see how I’m talking on the phone, and it’s impressive!”

He will also be able to program unique settings for various locations and remotely adjust the volume anytime such as when he’s at home or in a meeting.