Giving Back in India: Natalie and D'Anne's Story 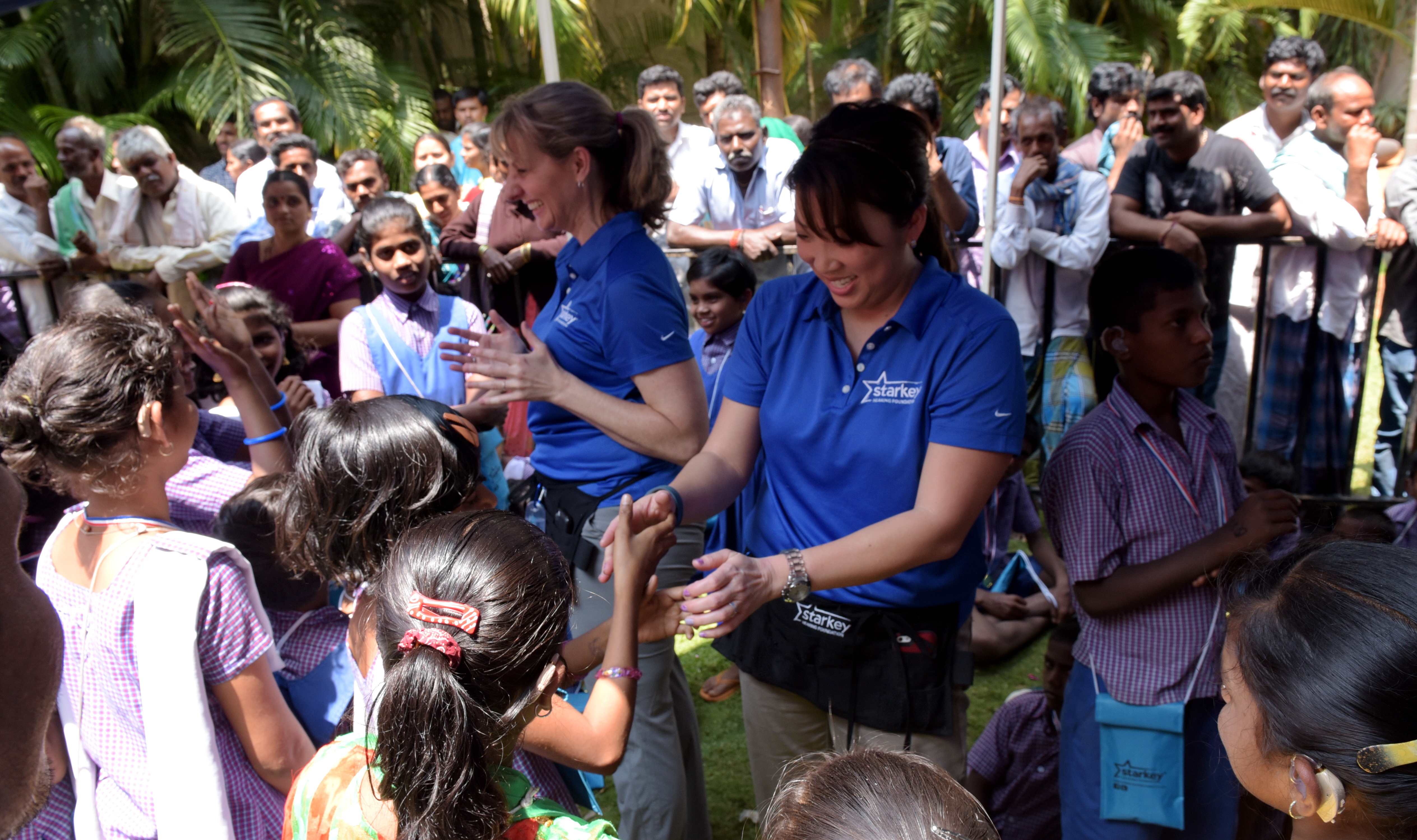 Natalie Phillips has over 19 years of experience as an audiologist and sought for years to become part of humanitarian audiology efforts. Friend and colleague, D’Anne Rudden was in the same boat, having dreamed for years to be part of Starkey Hearing Foundation’s global efforts. The two diligently watched and followed “Operation Change” throughout its inaugural 2014 season, and at the end, both Phillips’ and Rudden’s dreams came true when they won the opportunity to travel with Starkey Hearing Foundation on a hearing mission to India.

“I was so excited to watch Operation Change every week that I started to live tweet the show with Dr. D’Anne Rudden,” Phillips said. “I really did not have a favorite episode as each episode highlighted the efforts of Starkey Hearing Foundation bringing better hearing to the world. Operation Change was an amazing show, which incorporated a team of individuals who partnered with organizations to find a need within the community to help make a change within that community. In addition to fitting hearing aids, the team found areas of need including building a water well, building a community center, creating a soccer field, teaching artisans products they can create, as well as provided many other opportunities for people within a community.”

Phillips and Rudden were both excited about the opportunity to give hearing to the world.  “As an audiologist,” Rudden said, “it has always been about helping people hear better, one individual at a time. As a yoga practitioner and teacher, to do this work here for the people of India … there were no words for my excitement. People came from miles away, dressed in their best clothes for this often life-changing event. They came from such a wide variety of places, from local schools to rural outposts; with teachers, parents and many who were ‘walk-ins,’ hoping for the gift of hearing.”

In India, the two women traveled with the team to deliver and fit hearing aids to 700-900 patients each day. The hearing mission kicked off with an orientation about Starkey Hearing Foundation’s three-phase hearing healthcare model, and each day began with an inspirational pep talk from Bill and Tani Austin. “Our mission was helping within Phase 2, where we began the day with battery parties — taking tabs off batteries, putting them in hearing aids, making sure the hearing aids worked and then organizing the hearing aids into bags for each fitting station,” Phillips said. “The entire process was more than I expected: team members working hard, assisting wherever they were needed, having fun together and learning the culture all while helping hundreds of patients."

“There was one girl on the first day who went through all 10 power levels of hearing aids … no expression,” Rudden recalled from the trip. “I called Tani over to help me, fearing that this was it — that she was beyond our reach. Tani calmly put a body aid on and eased the volume louder and louder. With the body aid on, the little girl just lit up! Her smile was a mile wide. She started to babble and attempt speech with encouragement and soon was singing into the microphone, delighting in the sound of her own voice.”

Phillips said as an audiologist working in the U.S., she is proud of the fact that she can offer patients most if not all the available options for better hearing, and noted that unlike in India, patients have access to hearing help through donations, foundations and insurance. “While fitting hearing aids in India, what amazed me the most were the countless patients who presented with “deaf speech”— speech that is difficult to recognize due to the heavy placement on vowels or mispronunciation of words. As I fit these patients, I found that many of them had a very mild hearing loss, which for many, had resulted in being placed in “hearing impaired” schools. There was a young man, 22, with “deaf speech” who had gone most of his life with a mild hearing loss and yet had been put in a hearing impaired school where little to no speech was used in favor of signing. “My heart just dropped when I found he had a mild hearing loss, knowing that if he had the opportunity to receive a hearing aid earlier, he would not be speaking the way he was.”

A lack of hearing health awareness and improper diagnosis can lead to such mistakes. Fortunately, another patient Phillips saw, a 7-year-old girl, will now be able to develop proper speech with ease thanks to a corrected evaluation. The girl had no ability to speak, so Phillips used motions to communicate. As Phillips made soft sounds behind the girl’s head and she responded; it was evident no hearing aids were needed. “She responded so well to the soft sounds that I decided to take her hearing aids out and repeat the Ling sounds (ah, oo, ee, sh, ss) and try some discrimination of solid sounds,” she said. “She was able to reproduce them all, so I sent her to the counseling stage with a diagnosis of normal hearing. The teachers who accompanied her could not believe that she was not going to get hearing aid devices, but quickly understood after talking to her, that she had no problem at all.”

How the hearing mission changed them

“I have been blessed to be able to combine a career of helping individuals obtain the gift of hearing with a passion to give back and make a change in the community by participating in this event. It has opened up a world of change, showing me that I alone can do something, and many caring individuals working together as a team can bring change to the world. I have learned so much about myself during this experience: 1) Bill Austin says it best, ‘Alone we can’t do much. Together we can change the world’ 2) Don’t be afraid to step out of your comfort zone. 3) Do what you love.

We can always do more … give more love, be more compassionate and have more gratitude. If you can be of service in the world, even in a small way, you are forever changed. One of my teachers expressed it perfectly when she said to truly be engaged in service is to “ignore the story and see the soul.” Through this experience, I have tasted the “elixir” of service with Starkey Hearing Foundation and never felt more alive. Since coming home, I have been obsessed with “getting back” to the mission, and I know with every fiber of my being that Operation Change just ignited my fire.