Almost Missing the Music: A Conductor Gets His Dream Back 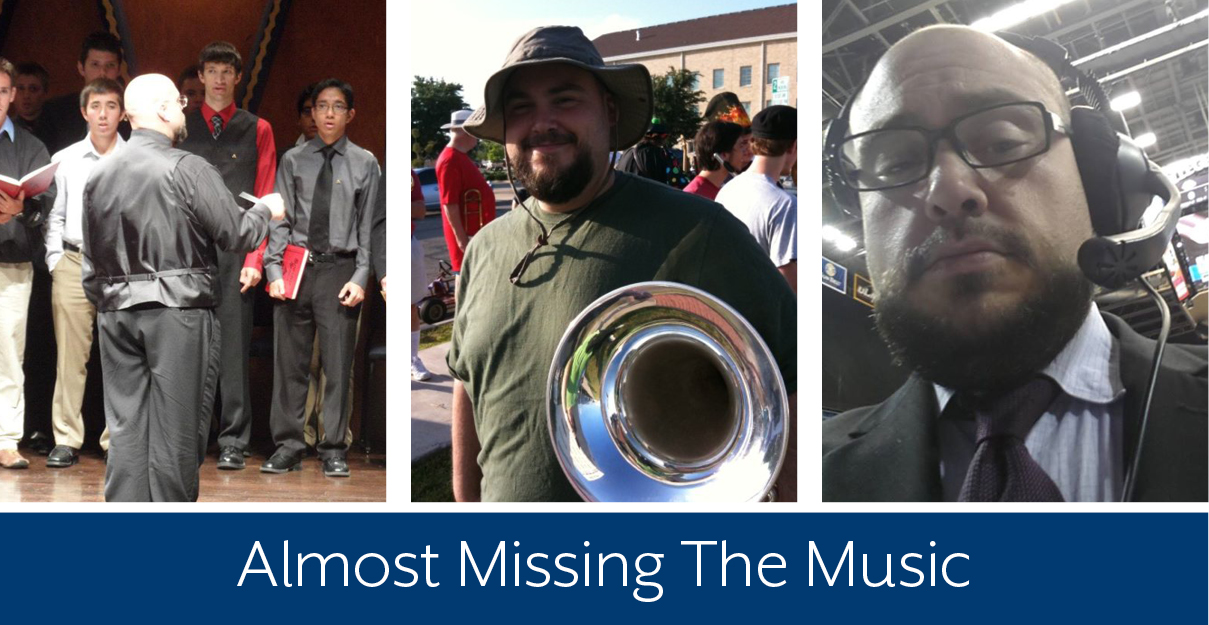 What if one day you felt like you had no choice but to give up your dreams, your future? What if one day, the life you envisioned for yourself no longer seemed possible?

What if, thanks to hearing aids, it was again?

For Jason Guidry, 37, music is everything. It is his passion, and it is his career. But towards the end of 2014, Guidry contemplated giving it all up.

Guidry was born with a flat ear surface and part of the pinna on his right side, and a completely functioning, normally-constructed ear on his left side. As a child he never learned to sign, but he said he still has to remind himself to slow down when talking.

Despite lacking a right ear, Guidry began playing the tuba as a child and then as an adult switched to the euphonium, a valved, baritone brass instrument. His music brought him to the University of North Texas where he earned his undergraduate degree in composition, and he is now in his last year of graduate school at University of Texas in Arlington where he is studying wind conducting.

Guidry has faced the challenges of playing and learning with single-sided deafness, for most of his life, and last year they almost seemed too much. “It wasn’t so much a matter of wanting to," he said. "It was a matter of ‘Can you?’ or ‘Can’t you?’. “I had to struggle to hear sounds, interpret them and then respond to them at the right time and all with one ear. My ear was doing the work of two, and when I’m playing sometimes my brain was overexerting itself from trying to interpret other players’ sounds, focus on my own instrument, read the music in front of me and still keep up with the piece as a whole.”

“There are just all these variables you have to navigate in such a short time—the pitch, the time, the tempo—it’s hard to keep up and not get lost,” he said of playing in an ensemble. Even when conducting, Guidry said he relies on visual cues and hand signals to tell his performers what to do and see who and when someone is playing.

“You can see in my sheet music that I write where every single instrument playing comes in so I have a chance at coming in myself at the right time,” he said of how he copes playing in an ensemble. “Most musicians count beats and rests, but I can’t do that. When I conduct, I use hand signals and am scanning the band for who is playing and who is next.”

Fortunately, multiple surgeries were able to create a functioning right ear for Guidry. In the last few months, Guidry began to research single-sided deafness more and started to consider hearing aids. “I gave my information to different hearing aid dispensers in the Dallas-Fort Worth area, but it just seemed like no one was really interested in dealing with single-sided deafness,” Guidry said. Luckily one did respond, and Guidry was fit with Wi Series i110.

But the challenge with Guidry’s fitting was getting a hearing aid to stay in his ear because of how his right ear had to be constructed,. Guidry came to Starkey Hearing Technologies for help, and Starkey’s CEO Bill Austin was able to create a custom mold for the right ear.

“It’s sort of like having a new body part,” Guidry said of having hearing aids in both ears, “and I’m not sure how to use it yet.”

The hearing aids are unique as well, programmed specifically to aid Guidry in his musical pursuits. A setting helps Guidry hear himself over the other instruments in one hearing aid and hear the rest of the ensemble in the other hearing aid. There are challenges he said he’s thinking about, including handling the sounds of bells or other loud instruments and how his hearing aids will affect his listening and identity tests results in classes.

“This is new for me, and it’s going to take time to learn how to adjust with them,” Guidry said of hearing with hearing aids. “But now, it’s like I can do this. I can conduct and play…I can do this!”

After only a few weeks wearing two hearing aids, Guidry said he’s already noticed the incredible change. For example, after a recent conducting lesson, Guidry said he noticed he didn’t have to work as hard to hear or learn the music anymore.  He explains the transformation:

Before today, I would guess 70 percent of my brain capacity went to audiating the score, and anything left over was used for baton technique. As scores got more intricate, my baton technique would suffer, because I'd need that brain capacity to hear myself sing while singing the next part while reading what's next.

Today, I was able to hear myself, sing, conduct, keep okay tempo, and hear and react to instructor feedback while conducting, while having some brain "buffer" for the difficult spots. I had been working so hard, only to crumble in lessons. So I'd work even harder, and still have bizarre errors and absolutely no brain capacity to evaluate OR adjust anything I was doing in real time.

Guidry will graduate in 2016, and while he isn’t completely sure what he’d like to do after graduating, he said he’s OK with that because now he has choices.