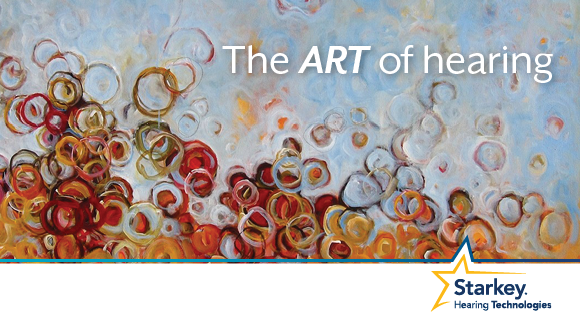 Patrick K. Pryor, Minneapolis artist and part-owner of the Kolman & Pryor Gallery, has had hearing loss since he was a child. He recently decided to take the next step toward better hearing by trying hearing aids. We sat down with Patrick to talk about how hearing loss and art have played profound roles in his life, and we follow him along his better hearing journey with Halo™ 2 hearing aids.

Art has always been a constant in Minneapolis artist Patrick Pryor’s life. But since he was 6, hearing loss has also been the other constant.

“It was until 2006 that I realized it’s been affecting my entire life,” Michigan native Patrick, 41, said. “Having a hearing loss has really shaped who I am as a person. How I interact with people, how I relax, what I love to do.”

The exact cause of Patrick’s hearing loss is unknown, but doctors have guessed it was either congenital or the result of a lot of early age ear infections. Despite finding a hearing loss, the doctors did not recommend hearing aids for Patrick as a child. “I was teased a lot for always asking ‘What?’, and I remember being socially awkward as a kid.”

As he grew up, Patrick developed coping methods to help himself hear. He cupped his ears to funnel sound, read people’s lips, smiled and nodded during conversations when he missed something, and repeated back phrases to ensure he heard correctly. When he began teaching, he developed another coping method. Patrick said with his groups of students he would walk closer to the child who was speaking. “It always felt weird to do,” Patrick said, “but I didn’t really have a choice.”

But teaching wasn’t the right fit for Patrick long term. In 2002, Patrick began pursuing a more active interest in art, and in 2004, he moved to Minnesota to pursue art as a career. “My mother had died when I was 22, and it just made me realize that life is short. If you’re not doing what you love, then what are you doing?” he said. “I just made the choice. I’d always drawn and painted, and I had sold a few pieces while teaching in New York, but in 2004, it was a conscious decision to call myself an artist.”

Patrick spent the next six years establishing himself as a talented artist within the Minneapolis arts community. With the support of friends Dr. Larry Greenberg and Carol Kindschi, Patrick was able to focus on launching an artistic career. His hard work and talent paid off as well, earning him the recognition from artistic patron Anita Sue Kolman. In 2011, Anita and Patrick opened their own gallery, now known as the Kolman & Pryor Gallery.

As an artist, Patrick’s hearing loss became a double-edged sword. On the one hand, it created an ideal creative environment where he could seal off the outside world and focus only on his work. On the flip side, it also brought back Patrick’s struggles hearing in groups and conversations.

“It’s easy for me to be an artist with hearing loss because what I do is all visual,” Patrick said. “With what I do, I don’t need to hear. It’s easy to sit in my studio and check out all day, but with people, I need to hear. The hearing loss makes it harder to be part of the community and to interact with other artists and at gallery openings.”

Patrick tried hearing aids in 2007 but they failed to meet his lifestyle and hearing needs. With too much feedback and little-to-no noise and wind cancellation, Patrick continued to struggle hearing at seminars, talks and presentations, and suffered from listening fatigue every day. “It takes a great deal of energy to engage in a conversation, even more so when I’m in a social situation, am meeting new people where I want to make a good impression, or it’s an interview or date,” Patrick said. Eventually, he began to intentionally isolate himself.

“I would wear headphones or earplugs and would intentionally isolate myself to avoid people talking to me,” he said. “As an artist, when I’m creating, the isolations can work, but at the same time, it doesn’t help me. If I want to be a leader in my community, I have to be able to hear and to interact with people.”

Earlier this year, Patrick’s partner Jodi started a Go Fund Me campaign to help Patrick pay for hearing aids in the hopes that he could better interact with his fellow artists. In late February, Patrick was found to have sensorineural hearing loss with a moderate loss of low-to-mid frequencies and a mild-to-moderate loss of high frequencies. Fortunately, Patrick had 100 percent directionality in his right ear and 96 percent in his left ear, indicating he still has almost complete understanding of speech sounds.

With an active and multi-landscaped lifestyle, Patrick was fit with Starkey Hearing Technologies’ latest Made for iPhone hearing aids, Halo 2.

“I’m hoping that with these, I’ll finally have the freedom to walk while talking to people instead of having to constantly follow them,” Patrick said of one of his hopes for how his new Halo 2 hearing aids will impact his life. “The studio is large with hard surfaces. A wood floor, brick walls, hard ceiling. It can be very loud and challenging. It will be nice to be able to move about and have conversations without stress.”

Patrick also hopes his new Halo 2 hearing aids will help him be more relaxed in social situations and be able to be a more active participant in the artistic community.

“The way I explore hearing loss, or think about, I can’t do it with paint,” Patrick said of a potential project focused around the idea of hearing loss. “I’ve been thinking about it a lot and how to represent having hearing loss, especially the theme of miscommunication. There’s a lot of drama in miscommunication, a lot of comedy. [The project] is something I want to do, and I think in time it will come together.”

Check out some of Patrick’s art at patrickpryor.com and learn more about Halo 2 Made for iPhone hearing aids by visiting our Halo 2 page.