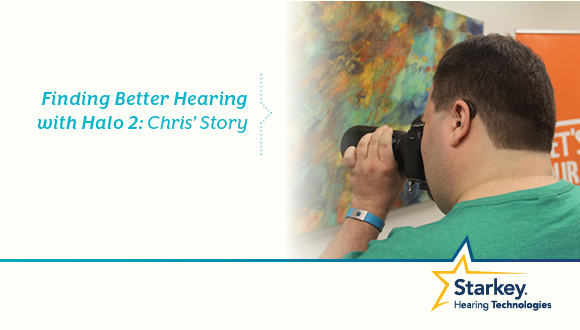 Hearing loss can be hard to identify at times, but for film producer and avid outdoorsman Christopher Free, 41, he’s known for a while that hearing aids would be in his future. Born in Saginaw, Michigan, Chris estimates his hearing loss began over 20 years ago. This March, he decided to pursue hearing aids and has already seen incredible benefits.

“I’ve had a few tests over the last 15 years and have been borderline needing hearing aids,” he said.” “In 2012, when my mother, Joyce Free, received her last hearing aids, the audiologist said I would be needing them in three to five years. I received a test last year and was told I needed hearing aids.”

As a gas station cashier and established film producer, hearing conversations and environmental sounds is important. Christopher has produced over six feature films as well as music videos but also works on other films or at concerts doing camera work, lighting, special effects, casting and sound work. But, with a mild-to-moderate sensorineural hearing loss, Christopher experienced challenges both at home and at work.

“Over the last couple of years, I have done sound on three feature films. I typically wear headphones that are hooked into a sound recorder or camera. I always had to adjust the sound levels and turn the volume up,” he said. At the gas station, Christopher noted further difficulties. “I often have to ask people to repeat what they said, or I will repeat back to them to make sure what I thought I heard them say was correct. I have at times thought I heard something else. I usually would hear a voice but understanding them would be a problem.”

Additionally, Christopher noted his hearing loss caused difficulties with enjoying media and having phone conversations. “I would turn the TV volume up and would have a hard time understanding people on the phone,” Christopher said. “I would playback the voicemail, or the answering machine, because I couldn’t understand someone. I would sometimes speak louder to compensate for my hearing loss, without knowing, and I often found myself hearing certain types of sounds better than others.”

In early March, Christopher was fit with Halo 2 hearing aids by Dr. Emily Gaines of Eye Centers of Tennessee. These are his first set of hearing aids but he’s already experienced numerous benefits!

“I love them,” Christopher said. “I actually get to enjoy listening to nature outside much better again. Sounds I normally am unable to hear or barely hear, I am now hearing. I don’t have to turn the TV up as loud and can hear voices much better. I am able to hear others without asking them to repeat as often, and I am constantly using the streaming features for the iPhone! I really love that I can stream all my phone calls from iPhone 5S into my hearing aid.”

Other benefits Christopher has experienced so far with his Halo 2 hearing aids are improved management of his tinnitus (he experiences a constant ringing without his hearing aids in) and listening comfort in various environments.