Starkey Hearing Foundation Gala: A Celebration of the Spirit of Giving 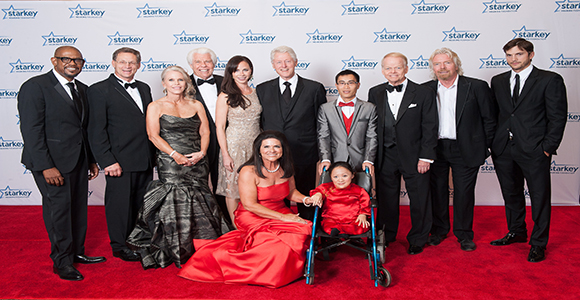 The gala is the foundation’s largest fundraiser, raising money to continue its programs around the globe. The gala also honors men and women whose contributions to our world have made it a better place. It celebrates the spirit of giving and showcases the tremendous impact of reflecting caring and sharing into on the lives of others.

An emotional introduction from Michael Kutcher captivated the audience as his twin brother and Starkey honoree, Ashton Kutcher prepared to take the stage. Michael described his brother as a protector, and related that same quality to Thorn: Digital Defenders of Children, the foundation Ashton Kutcher cofounded in 2009. Thorn was created to disrupt the predatory behavior of those who abuse and traffic children, solicit sex with children, or create and share child pornography.

President Bill Clinton thanked Starkey founders Bill and Tani Austin for their inspirational work and recognized each of the evening’s honorees before he introduced Starkey honoree Chunli Zhao “Angel.” Angel was born with brittle bone disease and was raised in a rural fishing village near Yangshuo, China. The former president spoke of Angel’s spirit and determination to overcome obstacles unfathomable to most people. He told a story of how, at age 15, Angel was not allowed to meet him when he visited her village. The authorities hid her away because they were embarrassed by her disability. Angel has since become a leading advocate for disability rights.

As a member of President Clinton’s Global Initiative, Starkey Hearing Foundation has pledged to fit and give more than 100,000 hearing aids annually to people in need, for a total of 1 million this decade. At the Gala, the Foundation announced it has fit more than 165,000 hearing aids in the last year alone and is nearly 40 percent ahead of schedule on their commitment.

Honorees were recognized for the change they are making in the world, and each spoke about their causes and the work Starkey Hearing Foundation does around the world.

“It is an honor just to do the work I do every day with Global Health Corps,” Barbara Bush, CEO and cofounder of Global Health Corps, said. “It is unbelievably inspiring and encouraging to go on the Starkey missions and see people’s lives change in one minute.” Bush has participated in three Starkey hearing missions, two in Uganda and one in New York City.

Sir Richard Branson spoke about the power businesses have for creating change. “What we need to do, is get every single company in the world to adopt a problem. And if we can join with governments and social workers we can get on top of all of the problems of the world,” Branson stated. “Businesses can use their entrepreneurial skills to look at a problem and see it differently.” Branson concluded his speech by recognizing Foundation cofounder, Tani Austin’s birthday, and queuing the live orchestra to play “Happy Birthday” as the audience sang.

Attended by more than 1,600 people, the 2013 So the World May Hear Gala raised a record-breaking $8 million through ticket sales, sponsorships, donations, and live and silent auctions. All funds will be used to further the Starkey Hearing Foundation’s life-changing work.