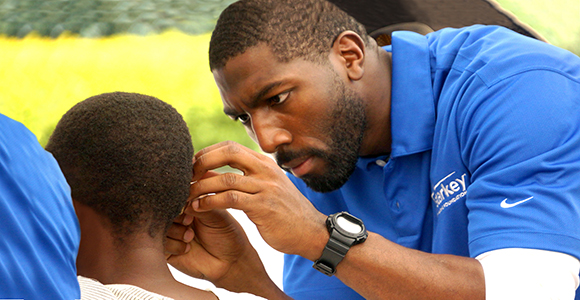 Another exciting football season is upon us and Starkey Hearing Technologies, along with the Starkey Hearing Foundation, are thrilled to announce a new partnership with the Minnesota Vikings to help educate fans on hearing loss.

Hearing loss is pervasive, affecting 34 million Americans, and it is a growing problem especially among youth. Research shows that one in five teens in the United States has hearing loss, largely due to high-volume sounds in daily life such as music streamed loudly into headphones.

In an effort to help educate young people on this issue, Starkey Hearing Foundation created the "Listen Carefully" program to encourage youth to protect their hearing. In the last year, the Foundation distributed more than 16,000 Listen Carefully teaching guides to schools. These guides focus on the science of hearing and encourage students to put the lessons into practice.

Vikings fans will be encouraged to "Listen Carefully" through radio spots and game day program messaging at Vikings home games throughout the 2013 season. Fans will also be provided Starkey branded ear protection prior to all home games at Mall of America Field.

In addition, for each touchdown scored by reigning NFL MVP Adrian Peterson and All-Pro wide receiver Greg Jennings, the Vikings will donate $500 to Starkey Hearing Foundation to give the gift of hearing to people in need around the world and right here at home. The team will present the Starkey Hearing Foundation with a check during one of the final home games of the 2013 season.

In 2011, Peterson joined the Foundation on a mission trip to Uganda while Jennings helped give the gift of hearing in New Orleans (2013) and Tanzania (2012). Watch a video below that  features both of these players talk about how their work with the Starkey Hearing Foundation.

For more information go to - http://www.hearing.starkey.com/vikings