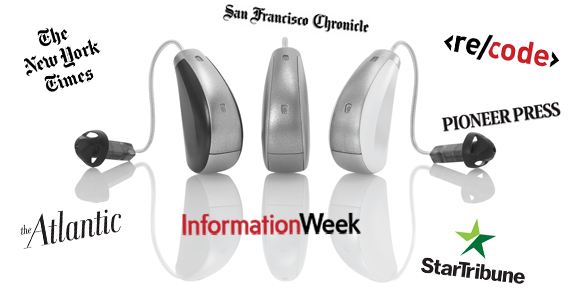 In just a month since being released, Halo, our Made for iPhone hearing aid, has made a remarkable impact in the marketplace. We are thrilled with the positive response it has received from consumers and hearing professionals alike.

Halo has also captured the attention of some of the most influential media outlets in the country. In the past month, Halo has been the focus of numerous articles including features in the New York Times, the Atlantic, San Francisco Chronicle, re/code, Information Week, Minneapolis Star Tribune and St. Paul Pioneer Press.

Lets take a look closer look at what they are saying:

“When I recently tried Halo, a set of iPhone-connected hearing aids made by the American hearing aid company Starkey, I was floored. Wearing these hearing aids was like giving my ears a software upgrade. For the first time, I had fine-grain control over my acoustic environment, the sort of bionic capability I never realized I had craved. I’m 35 and I have normal hearing. But if I could, I’d wear these hearing aids all the time.”

“Some people who have used them, though, said the new hearing aids were well worth the price. “I fell in love with them in the first 30 seconds,” said Todd Chamberlain, who recently began using a pair of Halos.”

re/code: “Next-Generation Hearing Aids Tune In to the iPhone”

“Starkey’s Halo hearing aids, and its companion TruLink app, allow the assistive devices to connect directly with the iPhone via Bluetooth without the need of any intermediary device, such as a telecoil or wireless accessory.”

“The app allows people to easily adjust the sound settings to the environment. The geotagging feature uses the iPhone’s integrated GPS to trigger customized settings whenever the wearer returns to familiar places — a favorite restaurant, the movie theater, etc.”

“This versatility is what most surprised Dusty Dorey, who was an early tester of the Halo hearing aids. I didn’t think about it until I turned on turn-by-turn navigation and it started going into my hearing aids,” Dorey said. “Having it pipe directly into your ears is awesome.”

The Atlantic: “When Your Hearing Aid Is an iPhone”

“The main problem with hearing aids, though, has less to do with technology and more to do with culture: Many people who need the aids don't want to get them.

“While hearing aid manufacturers have responded to this by designing devices that are as small as possible and custom-fitted to the ear canal, one company has come up with another solution: a hearing aid that is integrated into smartphones. Starkey Hearing Technologies recently launched Halo, a hearing device that syncs with iPhones and iPads. The technology, the company says, doesn't just amplify hearing; it also allows users to listen to music, sync movies, receive phone calls, and chat over Facetime.”

"The sound, clarity, and general hearing aid mode are much better from what I'm used to," said Halo tester David Brahee, who lives near Minneapolis. "Its software package is easy to manipulate and understand, almost intuitive as to where you go next.

“On Monday, Starkey will release its hearing aid, Halo, which connects to an app available in the App Store. Conversations, music, movies, phone calls and other audio are streamed to the small earpiece, and users can control the volume to precise degrees. In a recent test of the device, conversations unfolding in the next room went from undetectable to slightly audible.”

The functionality of iPhone-enabled hearing aids — and the sound quality — are enough to convince Dave Brahee to upgrade his traditional hearing aids. A tester for Starkey, Brahee says there is a night-and-day difference between Halo and his regular pair.

He enjoys streaming music to his ears without having to use headphones during workouts, and he also likes how the app automatically adjusts sound levels when he’s in a car. “This has been a real joy for me,” says Brahee, 65, of Waconia Township, who has worn hearing aids for about four years. “They are just remarkable hearing aids with so many little features that are really, really neat. They are leaps and bounds better than my other hearing aids.”

Aging baby boomers, increasingly suffering from hearing loss, often are reluctant to wear hearing aids, which they associate with, um, aging. Eden Prairie-based Starkey, which is among the world's leading hearing-aid manufacturers, will begin selling one of the new devices, called Halo, early next week.

“Dusty Dorey, a 29-year-old Minneapolis software trainer with lifelong hearing loss, has been testing the Halo hearing aid and is delighted with it.

The technology's high degree of adjustability has allowed him to fine-tune it for situations he finds problematic, such as high-pitched voices or people speaking softly. In the past, he would have needed to visit his audiologist to have such adjustments made.”

“He's also impressed with how the Halo app can recall places he's visited and the corresponding hearing-aid settings, and activate them automatically as required.

"When (Starkey) showed me that for the first time, I was pretty blown away by that," Dorey said.”

Research shows that nearly 40 million Americans are living with some degree of hearing loss, and many of them are our parents. Starkey's Halo hearing aid can help with this. Featuring Bluetooth connectivity, the Halo can stream phone calls directly to the hearing aid from an iPhone, and Apple's built-in virtual assistant Siri can respond to voice commands and read e-mails and texts on its own. It even has a "find my hearing aid" feature, its own version of "Find My iPhone" app.