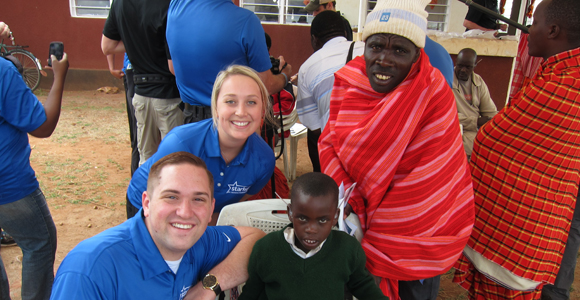 This summer, Starkey Hearing Technologies was proud to support the 10-part OWN: Oprah Winfrey Network documentary series Operation Change. The series followed Starkey Hearing Foundation co-founders Bill and Tani Austin and their son Steven Sawalich as they were joined by celebrities and philanthropists to tackle some of the most challenging issues plaguing our world today.

During each episode, viewers were given the chance to join Operation Change on a future trip. Pete Hutchison was the show's Tanzania trip winner and packed his bags to head overseas this past November. We caught up with Pete to hear all about his experience giving the gift of hearing and what stood out to him the most.

Q. Tell us a little about yourself and your background.

My name is Pete Hutchison and I am a 3rd year audiology student at the University of South Florida (Go Bulls!). I first became interested in pursuing a career in audiology when I realized that there were philanthropic opportunities in the field, and I always hoped that I could do something like what I was able to do with Starkey Hearing Technologies. It was a dream come true for this audiology student.

Q. How did you hear about Operation Change? Do you have a favorite episode?

I heard about Operation Change through Starkey’s (and many audiology friends’) Twitter and Facebook posts. I had a friend who was able to attend the Peru mission last year and he made sure to remind me that the show was on. My favorite episode was definitely the Tanzania episode. As soon as I watched it, I knew this was the country that I wanted to visit the most. The culture was just so different and beautiful. I did catch myself daydreaming about what it would be like to win.

Q. What was it like to find out that you won the contest to go on a hearing mission with the Starkey Hearing Foundation?

I don’t think that I can describe how excited I was. I had just attended Starkey University a week before finding out that I had won. I could not believe that a week earlier I had been at the Eden Prairie headquarters hearing about Starkey Hearing Foundation and this show from Mr. Bill Austin himself, and then all of a sudden, I am preparing to go to Tanzania. It was absolutely surreal, and as an audiology student, the best news I could have received.

Q. Walk us though what it’s like to be on a mission (day-to-day activities, etc.).

The day-to-day activities were packed. The first day was primarily hearing aid fittings. We met with Tani Austin in the morning and she familiarized us with what we would be doing and eased any nerves. I got to fit hearing aids with the Tani Austin for the children of Arusha. How many audiology students can say that? The day was incredible. Honestly, I don’t remember if I was tired because I was so excited to be there.

Fitting the hearing aids was such an incredible experience. Personally, I kept the tube clippings so I could count how many hearing aids that I fit (26). Never again will I have the opportunity to just have a seemingly endless supply of hearing aids to give to people in need.

Not only was the experience rewarding in terms of the emotional aspect – seeing children hear their own voices for the first time – but I was also impressed with the system that Starkey Hearing Foundation has in place. From the technology quality to the way that they fit the hearing aids, it showed me that Starkey is a name that I can support.

I was so impressed with the Bill and Tani Austin. They both worked through lunch when others took a break and they were on their feet until the last patients were seen. As an aspiring and moldable audiology student, it was a really great experience to see the behind-the-scenes work of the Foundation firsthand, as I am in a phase where I am deciding what companies I want to work with as a professional. Starkey showed me that they are a genuine, generous, respectable, and trustworthy company.

Q. Is there one memory from the mission that stood out for you?

On the second day, which was a hearing aid mission as well as a celebration for Bill and Tani Austin by the people in the Loibersoit area, the Maasai people honored us all by presenting us with a traditional “shuka” or a Maasai blanket and jewelry and other items. It was just so humbling to be a part of this experience. I will never forget it.

Q. What was your main lesson or takeaway from the mission?

As a future audiologist, this mission really showed me how important it is to give back. I always wanted to be a part of something that helped other people. It is so easy to forget this when the rest of the world seems to be about how can I make the most money. I was reminded that giving the gift of hearing is a HUGE thing that I can offer as a professional, not only on hearing aid missions to other countries, but in my daily pursuits as an audiologist. I cannot thank Starkey Hearing Foundation and the Operation Change team enough for this opportunity! Asante sana!