Spending A Day As Someone With Hearing Loss 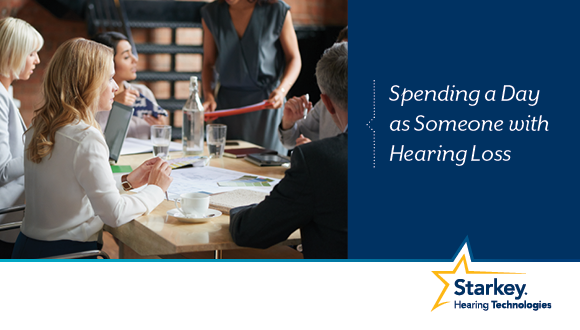 Having a hearing loss can be difficult. But trying to explain it to someone who has normal hearing can be even harder. For example, try explaining the difference between “hearing” and “understanding” to someone with normal hearing. It can take hours.

To help provide a better understanding of what it’s like to really live with hearing loss, we ask hearing professionals in our Greenhouse Class each fall to participate in an experiment. They are asked to wear earplugs for six hours straight and then journal their experiences as part of their training in this special class.

Below are excerpts from last year’s class. They show how just one day with a mild-to-moderate hearing loss can impact someone’s life at home, at work, alone and in social settings.

Hearing loss can increase stress, worry and cause frustration and embarrassment

Christy B. chose to wear her earplugs at work. What she experiences is what someone with untreated hearing loss often goes through every day in many professional environments:

“I felt very stressed and tense. I spent the whole time concentrating, and more than once, felt the need to take [the earplugs] out because it was interfering with my work. I felt insecure as if I had to stay on my toes to not miss anything. I caught myself repeating what coworkers said for confirmation. I wouldn’t take my eyes off them because I didn’t want to miss anything, and it was embarrassing to ask them to keep repeating things. Nothing was as clear as I felt it should be and that was frustrating.”

At home, Christy described the following: “I was exhausted. I spent most of the day living in a slightly different world and just subtle changes I didn’t notice throughout the experiment started to present. My neck and back hurt. I had a headache. To be quite honest, I was a little moody. It’s amazing to me how exhausting, physically and emotionally, it was to have a little of my hearing altered.”

Hearing loss can be exhausting, negatively impact work, and isolate you from friends and family

Joe S. wore his earplugs at lunch and at the office afterwards. He noticed immediate difficulty hearing in the noisy restaurant and relied on lip reading and context clues to follow his friend’s conversation. At the office, Joe notes the abrupt struggle in performing his job and, with his newfound hearing loss, he lost the ability to multitask. When he returns home, he notes not only the desire to isolate himself, but also his family’s frustration with him.

“Right off the bat I noticed I was having trouble with my job. It was very difficult to understand what people were saying. I also spoke louder than necessary. I was unable to hear the bell when patients would walk in. It was very difficult to complete each task within a normal timeframe. I was not able to work and listen to someone else. Cleaning the hearing aids while also speaking to an associate became impossible. Hearing loss definitely has a major impact on your work and your ability to perform your job functions.”

Afterward, Joe noted just how thankful he was for his hearing. “We take so much for granted and our hearing is definitely one. My mind and body were tired from straining to hear and understand all day. My brain was fatigued from working so hard to decipher sentences and phrases from a jumbled mess. Communication became very difficult and frustration ran high. I didn’t want to be around people as much as I normally do because of the trouble I had hearing and understanding. Also, my family was becoming frustrated with me because I couldn’t hear them when they needed me.”

Hearing loss can impact your independence and ability to communicate effectively

“Conversing with people was very difficult. I constantly had to say “what” and ask people to speak louder. At times I just shook my head and made believe I heard what people said, just to avoid embarrassment. It became very frustrating, and I even began to feel depressed that I couldn’t communicate normally. Speaking on the phone wasn’t possible … I kept on worrying that I wouldn’t hear people when they were going to speak to me.

When I was standing by the take-out counter ordering food, I was worried that my speech sounded strange and that I wouldn’t hear the man behind the counter if he had a question for me. I was sitting with some friends and they couldn’t stop laughing about how loud I was talking. My wife and kids were getting frustrated because I kept saying ‘What’ and ‘Please repeat yourself louder.’ I really got a sense of how difficult communication can be for someone who has a hearing loss. Communication, which is something that should be easy and natural, became a stressful activity when I was occluded which caused me stress and embarrassment. Not only was I affected tremendously but so were the people around me.”

For S. Temby, she experienced numerous problems with family and friends. After removing the earplugs at the end of six hours, she also noted that the experience helped her understand her grandmother’s behavior better in the past.

“I had to strain to hear people speak to me. I could not understand what my grandchildren said to me. I found myself watching their actions and faces trying to figure out what they were talking about. Talking to my husband about what I could make him for lunch (from the kitchen to the office) was absolutely maddening. After asking my friends ‘huh?’ a few times [at dinner later that evening], it was just easier to eat and let them talk. They would look at me like I was an idiot for asking them to repeat. Everything was dulled down and muddled.”

“I was relieved when I took out the plugs. I instantly felt calmer and at ease … it was quite an experience. It makes me see more clearly why my paternal grandmother did some of the things that she did. The TV was always turned up so loud that you couldn’t think straight. She was asking me to repeat often. She chose to stay closeted in her home because she said it was just too hard to be out in public. Did we offer her hearing aids? Yes, we did. She would have none of it. She said that she didn’t need it if she just stayed home. The last 8 years of her life were like this.”

Untreated hearing loss has a profound impact on a person’s life and overall wellness. It can result in negative emotions and consequences both at home and at work. More than that, it affects not just the person with hearing loss but everyone in their lives, as well.

Everyone’s hearing loss is different, but it’s important to help our friends, families and coworkers better understand what we go through each day with our hearing loss so that we can work together for better communication.

If you are experiencing problems with your hearing, consider contacting a hearing professional today to talk about your options. Visit our Find a Professional page here to find an office near you!