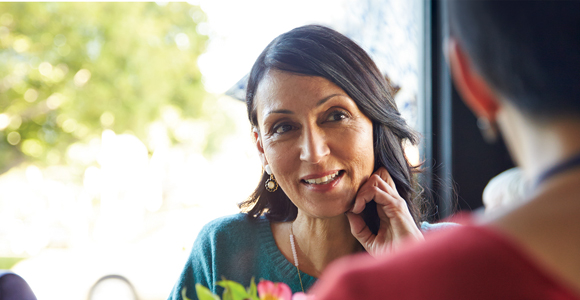 Have you ever thought about how your brain chooses which sounds to focus on in loud environments like coffee shops? Your brain is doing something amazing with incoming sounds – it is prioritizing those you want to pay attention to like the conversation with your friend across the table and ignoring other unimportant sounds like the coffee grinder and the conversations at the next table. The brain does this by using its ability to locate sound sources, an ability that is known as auditory spatial awareness. Spatial awareness helps you correctly identify the location of sound sources and allows you to communicate effectively in noisy environments.

Now imagine not being able to locate where sound is coming from in your environment. Would you hear the direction of traffic? How about a fire alarm? Hearing loss, by distorting sounds, can diminish spatial awareness. This explains why one of the hallmarks of hearing loss is having trouble understanding conversation in noisy environments.

Acoustic cues arising from how sound waves interact with the body, head and ears are directionally dependent and create a three-dimensional sense of space. To better appreciate the role of spatial hearing, compare the listening experience of watching an action movie on an iPad without headphones using a single speaker to that of hearing the sound effects in a movie theater. The surround sound speakers in the theater greatly enrich the auditory experience. Similarly, spatial awareness enriches the listening experience by painting a sonic picture of your environment.

Localizing sound sources is much more complex than visually locating objects. Humans are able to visually locate objects from as early as three months of age. Researchers have found that babies can visually select and extract information from their environments; for example, they can accurately select a red car among several green cars. While visual localization relies primarily on which part of the retina has been stimulated, localization of sound sources is more complex. It requires the brain to use higher level processing to locate the different directions sound cues are coming from and in turn encode that information into patterns that can be understood.

Wearing hearing aids can affect spatial hearing by altering the acoustic cues that indicate sound direction – specifically the difference in when sound arrives at each ear and the intensity of the sound waves. These cues vary greatly depending on the style of hearing aid a listener wears. For example, hearing aids that sit behind the ear produce very different direction-dependent changes than ones that fit inside the ear.

Researchers closely examine how spatial cues are changed by hearing aids to ensure wearers are able to maximize spatial awareness. Much time and attention to detail is spent analyzing the complexities of sound wave interactions and the location dependent variations of the acoustic signal. In-depth analysis of spatial hearing and how particular hearing aid styles can change auditory cues has led to the optimization of microphone location, the size and shape of hearing aids, and signal processing strategies designed to create a seamless listening experience for hearing aid wearers.

So, what does this mean for you? If you have normal hearing, spatial awareness is something you brain does effortlessly for you all the time. As a hearing aid wearer, you can be confident that researchers are diligently considering this aspect of hearing along with audibility and speech comprehension when they are developing new products.