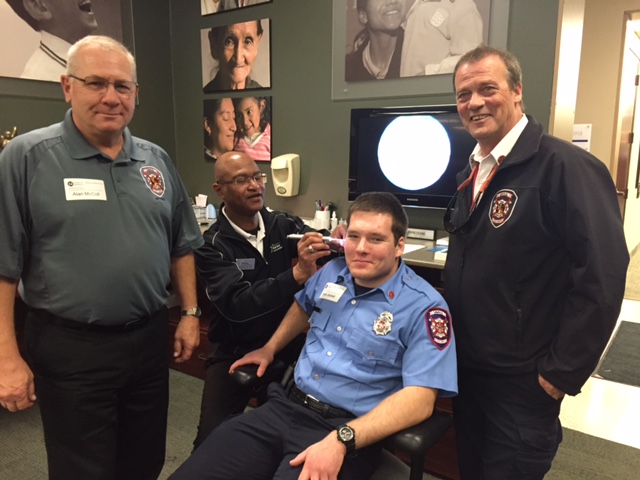 At the far end of a rectangular table sits a young man wearing a blue collared shirt with pale white buttons. A shiny gold badge sits above the pocket on the left side of his chest, perfectly paired with the small gold nameplate on the other side. Ironed to the left sleeve of his uniform is a red, blue and gold threaded badge with black lettering that reads: “Savage Fire Rescue, Est. 1951.” His hair is short, almost military in its style, and in his ears rest two small hearing aids with clear domes.

Kyle Jacket, 22, has had hearing aids since he was 4 years old when he was diagnosed with a condition known as enlarged vestibular aqueduct (EVA). He suffers from a profound hearing loss in his left ear and a moderate hearing loss in his right. Yet despite this, Kyle has pursued his dream of becoming a full-time firefighter.

“I need to help people,” Kyle said of why he is a volunteer firefighter and pursuing his fire science degree. “It’s just one of those things I need to do.”

Kyle originally applied to the Savage Fire Department in 2014 and was rejected as an applicant. He applied again this year and was accepted, becoming Savage Fire Department’s first firefighter with hearing aids. “Even without a disability, it’s really hard to become a full-time firefighter,” Kyle said, “but hard work goes a lot farther than just having a knack for something.”

“He has a huge, huge heart and so much passion,” Savage Fire Department Chief Joel McColl, 55,  said of Kyle. “He’s wanted to be a firefighter for a long time and was passed over the first time, but when he came back and reapplied, we stopped and really asked, ‘Could he do this?’ We’ve been working with Kyle for about a year now and there is no one I know who is more passionate about what he does.”

Kyle attributes part of his drive to his time as a Mdewakanton Public Safety Explorer. The program is run by Mdewakanton Public Safety and educates teenagers with emergency medical and fire service training to help prepare those who wish to become emergency medical technicians (EMTs), paramedics or firefighters. “I sort of found my inspiration there,” Kyle said of meeting full-time Mdewakanton firefighter and paramedic Mike Jernander. “He just kind of took me under his wing and told me I could be a firefighter even with hearing aids. He has hearing aids too and is a full-time firefighter and paramedic. He’s the one who gave me the stethoscope for EMT training that could be used with headphones over my hearing aids. He basically showed me I could to this if I really wanted to.”

Mike has been both a firefighter and paramedic since 1995 and is still a full-time paramedic today. “There’s a lot going on, a lot of noise at one time, and you have to really keep your eyes and ears open and pay attention more than usual,” he said of being a firefighter and paramedic with hearing loss. Mike has worn hearing aids since he was about 4 years old, and out of a family of seven, he is one of the five who wear hearing aids and suffer from a hearing loss. “My mom noticed early on and had been looking for it because of my father’s own hearing loss, so when it started becoming apparent, she got me in speech pathology early on.”

And while Mike’s hearing loss isn’t quite as sever as Kyle’s, the challenges he overcame with his hearing loss while becoming a firefighter helped Kyle pursue his own dreams.

“When I first stared as a firefighter, the other guys would look for things I would miss and complain about it,” Mike said. “Eventually as time went on, they got to know me and it got better. Even today, when I get a new partner, I have to adapt to them and they have to adapt to me, but what I have learned in this line of work is to tell them right away about your hearing loss.”

The reason for being upfront about a hearing loss Mike said is “so that you can help yourself work better with your partner or teammates.” He said he used to have a bad habit of pretending to hear something and acting like he heard it until his assistant fire chief pulled him aside and called him out on it. “[My assistant chief] told me that in our line of work, if someone says something you say it back. I learned to repeat everything someone said to me, and I still do it today. It’s important to what I do, because if I don’t repeat something to confirm I heard it right, it could mean life or death.” One example Mike gave was if he’s trying to treat an emergency patient and is on the radio with a doctor discussing medicine dosage. “If I don’t repeat it back to confirm the right amount, it could mean under or overdosing the patient. Getting out of that bad habit and forcing myself to repeat things pushed me forward and allows me to do what I do successfully,” he said.

Now, Joel has stepped in as Kyle’s mentor and within the last year, the 40-man Savage Fire Department has welcomed Kyle with open arms and worked out ways to make sure he’s not missing out on anything important. “In our environment, there’s a lot of challenges,” Joel said. “There’s engine noise, people screaming, water rushing … it makes understanding speech and communicating difficult, but we all work together to make things run smoothly. We’ve learned how to help Kyle where we can, such as speaking louder in meetings and making sure he can read our lips when we are talking one-on-one.”

According to Joel though, a large part of why Kyle’s come so far as a firefighter is that he never looks at his hearing loss as an obstacle, instead viewing it as just as another challenge along the way to becoming a full-time firefighter. “He overcomes his challenges every day,” Joel said. “He understands them, addresses them, and then works to overcome them so he can achieve his dream. My goal is to help him get a job as a firefighter full time,” Joel said. “He’s shown us just how powerful hard work and passion can be and made us more aware of how influential hearing loss can be, both for himself and for us.”

Some of the challenges Kyle faces as a firefighter include speech discrimination, especially when everyone is wearing full gear, filtering out speech in noisy environments and triangulating certain sounds.

Both Joel and Kyle are hopeful that Kyle’s new Starkey hearing aids will help alleviate some of the challenges Kyle is currently facing. But regardless of the struggles Kyle may still face in the future, he’s got big supporters in his corner and isn’t looking to give up any time soon.

“You deal with it as best you can,” Kyle said. “My hearing loss is who I am. It’s nothing I would’ve chosen for myself, but I got to do what I can with the hand that life dealt me. You just have to keep at it and not give up. Just find people like Joel and Mike to help, find advocates to help you and be an advocate for yourself. Speak up when you need to. If you need to be up front, say that. There’s going to be stuff you can’t do, but there’s plenty of stuff you can.”