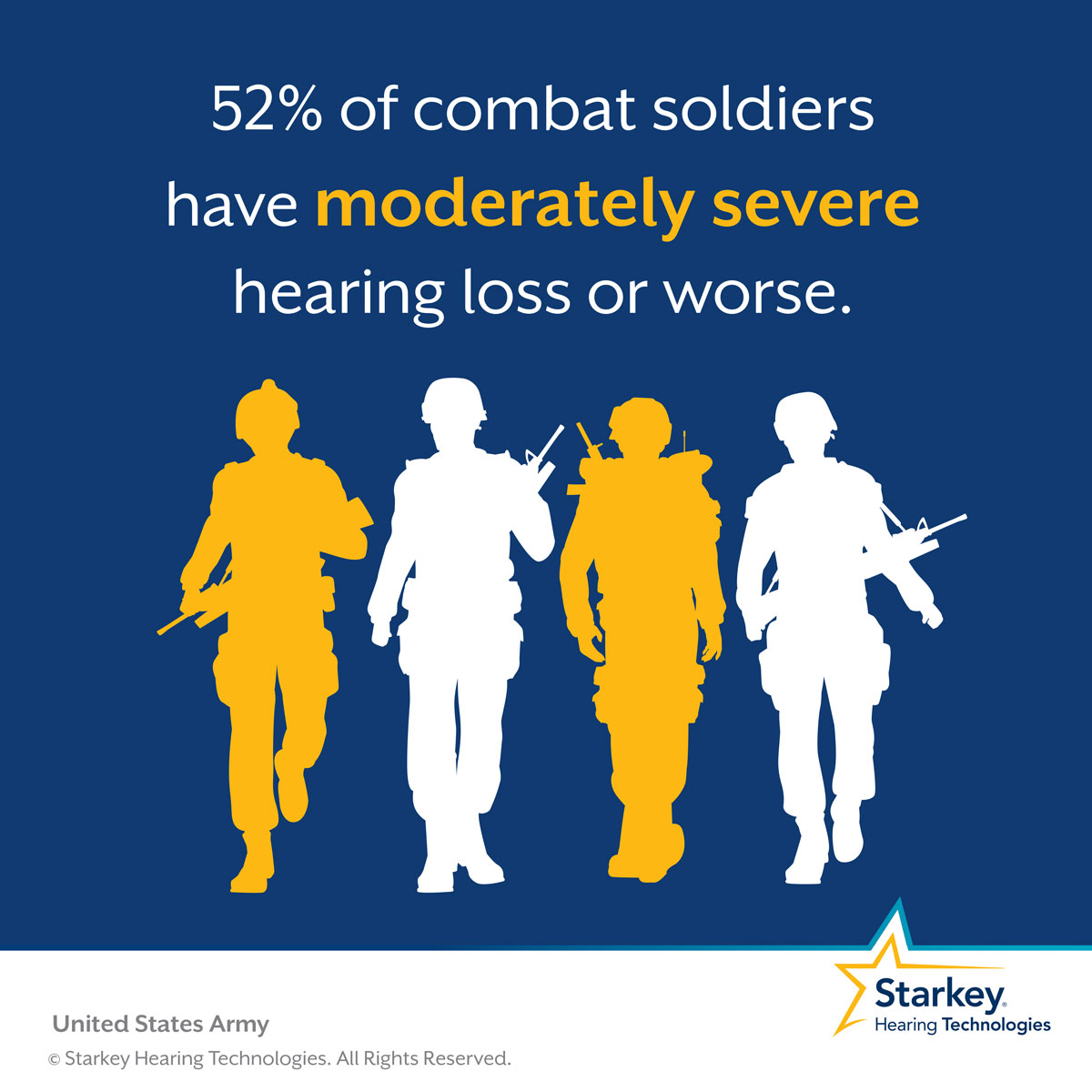 Sometimes an injury isn’t visible. Sometimes it’s hidden, and yet despite this, it’s impact is still powerful.

“If there is a single injury that afflicts military personnel more than any other, it would be hearing loss and tinnitus, a ringing in the ears,” former Army infantryman Stephen Carlson recently wrote in an article for the Washington Post. (Read the article here: “We treat hearing loss as an inevitable cost of war. It shouldn’t be”)

Carlson goes on to describe how, for military personnel, hearing loss can quickly transform from a nuisance to an ongoing issue affecting all facets of one’s life. He notes the difficulty in maintaining social situations, the resulting isolation from friends and family. He points out that between training exercises, weapons and large vehicular engines and tanks, hearing damage is inevitable.

And unfortunately, studies show Carlson is right. Hearing loss and tinnitus are extremely common in veterans. A study by the Journal of General Internal Medicine found that 16.4 to 26.6 percent of male veterans of the Afghanistan War and the Iraq War seeking Veterans Affairs (VA) care suffer from serious hearing loss and tinnitus. That same study found 7.3 to 13.4 percent of female veterans had hearing loss.

An earlier article by News 21 in August 2013 also highlighted the prevalence of hearing loss in post-9/11 veterans, stating that “Among post-9/11 veterans, 414,000 have come home with hearing loss and tinnitus, or ringing in the ears.” The article goes on to say that despite hearing injuries being one of the most commonly document traumas, they don’t get much attention. Retired Air Force audiologist Theresa Schulz says this is because few people actually die from hearing loss.

In recent years, military branches have become more proactive about hearing protection during training and real-time scenarios. In 2011, nearly 150,000 new cases of hearing loss and tinnitus were reported by the VA, and in 2012, the Department of Defense announced plans to integrate hearing protective technologies.

“The military itself is noisy by nature. You have weapons fire, Improvised Explosive Device (IED) blasts, shipboard noise, not to mention engineering rooms and flight decks where decibel levels reach extremely hazardous levels. Controls are implemented when possible, but there’s only so much you can do to suppress the noise of a jet engine,” said Navy Lt. A. Brooke Gordon, Medical Service Corps in an article for Navy Medicine Magazine.

In May 2013, the Office of Naval Research (ONR) hosted nationwide experts to discuss combating hearing loss and possible solutions. The ONR has its own Noise-Induced Hearing Loss Program and continues to work towards decreasing the incidence of noise-induced hearing loss and tinnitus. The Marines have made similar efforts and also have their own hearing conservation program.

Noetzel also explains in the article the difficulty for those in the military: hearing vs. survivability: “Soldiers have told me quite openly, the main reason they refused to wear, or partially wear, hearing protection while out on a mission was because it hindered their overall situational awareness," she said. "The old foam hearing plugs and other cumbersome devices, while effective in protecting hearing, denied soldiers the ability to clearly hear commands and possible enemy or friendly movement. Mixed with pulling security, it's a bad combination that can lead to injury or loss of life.”

Read more about how hearing can affect “survivability” here.

In short, hearing loss is extremely common in all branches of the military and can be compounded by post-service factors such as age, further noise exposure, medications and more.