“They’re not a stigma to me; they’re a superpower.” 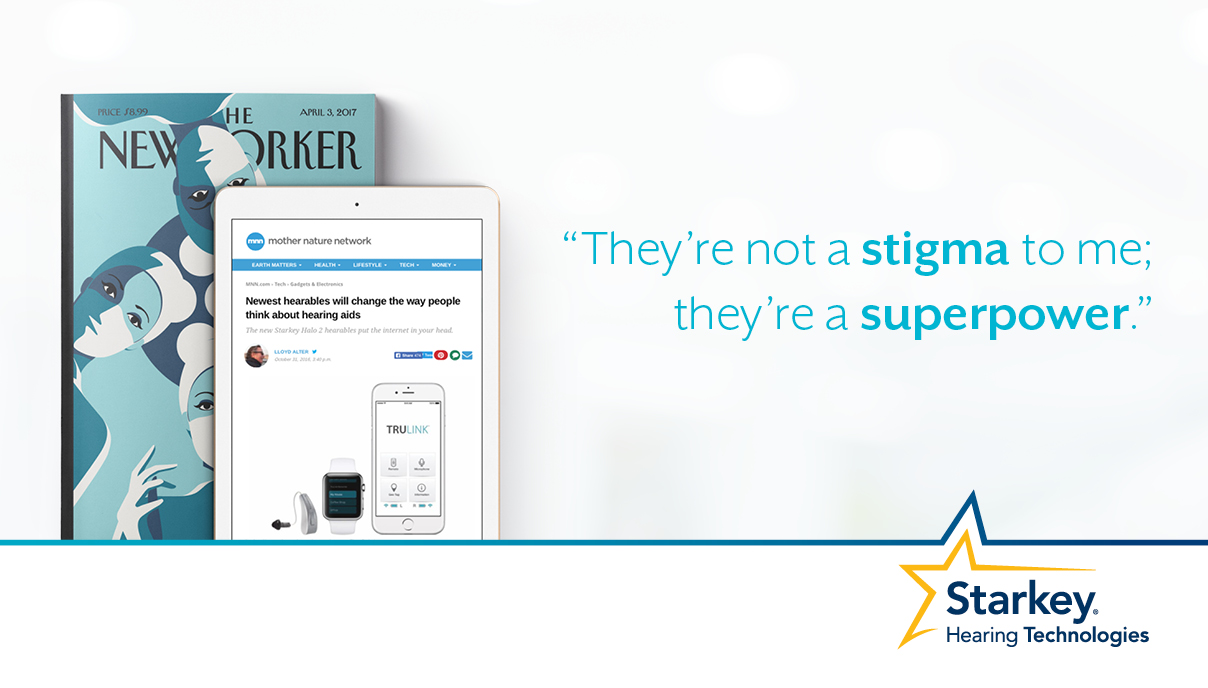 In The New Yorker piece, titled “High-Tech Hope for the Hard of Hearing,” Owen touches on his tinnitus — which he attributes to a cold, China and cabin pressure —before going deep into the causes of hearing loss and, ultimately, his quest to understand and treat his own hearing loss.

Owen’s quest leads him to Starkey — the only major hearing aid manufacturer based in the United States — and into a pair of Muse hearing aids. He writes:

“Each unit sits behind an ear, as my grandmother’s hearing aid did, but is so small that it’s all but invisible. A button on the part behind the ear allows me to choose among settings programmed by the audiologist. Two of them add a subtle tone that’s meant to mask my tinnitus, which during my hearing test she pinpointed at about six thousand hertz.

My main reaction when I first put the hearing aids on was mild annoyance at the sound of my voice. I also became more aware of turning pages, creaking doors, and the surprisingly varied noises made by my pants. The audiologist said that people with new hearing aids get used to all that within about a month, as the brain adjusts.”

While at Starkey, Owen also checks out our SoundLens Synergy, which “looks scarcely larger than the aspirin-size battery it runs on,” and Halo, Starkey’s “line with the most features.”

“Internet-connected wearables for your ears”

Halos — or more specifically, Halo 2s — are the hearing aids Alter wears and writes about in his MNN story, “Newest hearable will change the way people think about hearing aids.”

Alter, who has tried several different brands and styles of hearing aids since first needing them in 2012, writes that his Halo 2s are “more than just a serious upgrade. They’re more like ‘aural implants.’”

He refers to them as “hearables,” and correctly notes that “connected hearables are hot these days.” Why? Because they “do so much more than just help you hear.”

For Alter, his Halo 2s are his “default link to the audible internet,” thanks to their ability to connect seamlessly to his Apple iPhone, which enable him to make phone calls, listen to music and podcasts, and take advantage of notifications and alerts.

“As hearing aids,” he concludes, “these devices have changed my life by letting me hear the immediate world around me; as hearables, they are wiring me directly into a much larger world.”

Owen and Alter might wear different Starkey hearing aids, but both agree that the stigma of wearing hearing aids is coming to an end. “Once people start realizing that they do so much more than just help you hear, I suspect the stigma will disappear,” writes Alter.

Owen agrees. He points out that attitudes about being seen wearing hearing aids “may be changing … now that people of all ages walk around with electronic gadgets sticking out of their ears.”

Want to try Muse or Halo 2 hearing aids? Click here to find a local hearing professional who can set you up with a 30-day trial.

To read the electronic version of David Owen’s article in The New Yorker, click here.