Did Fred and Wilma hear better than us? 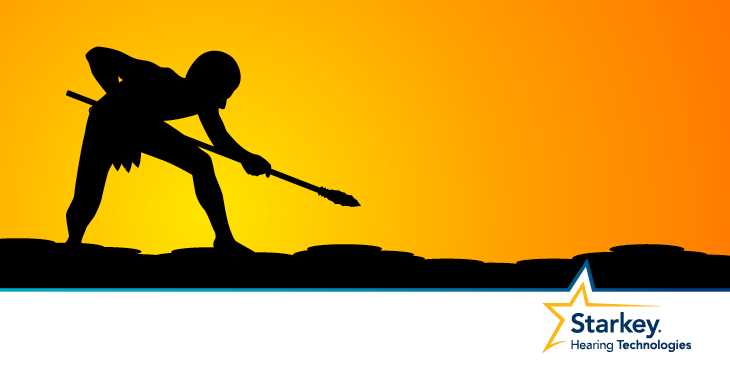 The Flintstones were fictional prehistoric cartoon characters of course, but did you know a recent study published in Science Magazine suggests the hearing of early hominins living more than two million years ago exceeded our own at certain frequencies?

Scientists believe early humans heard mid-frequency sounds better than we can today. Keen mid-frequency hearing acuity would have helped them communicate more easily while hunting in the great outdoors.

How do scientists study the hearing of humans who lived more than 2 million years ago? That was my first question, too!

Listening and communication needs were different back then

Anatomical differences in the outer and middle ear structures were discovered in the fossils. The external auditory ear canals were noticeably shorter and wider, described by the study as “more trumpet” in shape. The tympanic membrane, or eardrum, was smaller, and the middle ear bones differed in size compared to those in modern human ears.

Differences in the middle ear ossicular chain — the three bones in the middle ear, each, roughly the size of a grain of rice — also suggest that the hearing of prehistoric humans differed from our own. The length of the cochlea — the spiral snail shaped boney structure in the inner ear — was shorter. Researchers believe a shorter cochlea would emphasize mid-frequency sounds.

These structural differences suggest that our early ancestors had increased midrange hearing sensitivity between 1000 and 3000 Hz. Researchers theorize that ancient humans heard this mid-frequency range better than we can today.

Although early hominins did not communicate in the way we think of language today, communication was still very important for survival. Scientists believe early vocalizations were mostly comprised of vowel sounds, with an “increased emphasis on short-range vocal communication in open habitats.”

As communication changed, so did our hearing system

Our expanded frequency range (1-6kHz) is necessary to hear the majority of sounds we use in spoken language. For instance, the English language includes high-frequency consonant sounds like S, H, and F. High-frequency hearing is also important for understanding female voices and children’s voices which tend to be higher in pitch than male voices.

Researchers hope comparing anatomical hearing differences between early humans and modern humans will lead to a better understanding of how communication and language evolved.