The ear is the new wrist — for fitness tracking, anyway 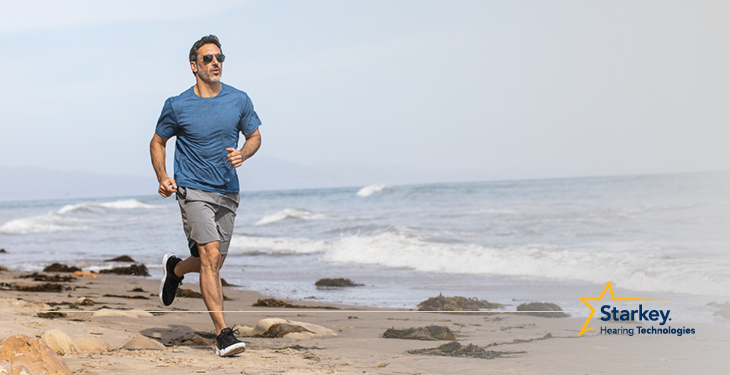 The average American walks 3,000 to 4,000 steps or roughly 1.5 to 2 miles per day1. Yet walking 10,000 steps per day has been shown to lower overall risk of heart disease, obesity, diabetes, high blood pressure, depression, and correlates with reduced risk of many common forms of cancer2.

None of the devices they tested were able to achieve error rates less than 20%3.

In a separate study published in the Journal of Sports Sciences, the iPhone’s pedometer function was found to be on average 21.5% less accurate compared to a research grade step tracker in free-living situations4.

The ear is a more accurate place to track your health

Scientists have long believed the ear to be a more reliable place to track movement and monitor health properties. In 2015, Outside magazine wrote:

“While the wrist is full of muscles and tendons that move, the ear is all cartilage and about the most inert part of your body. It’s also dark and the arteries here are near the surface of the skin. Shove a sensor into your ear and the signal is about 100 times clearer than at the wrist.”5

MIT Technology Review wrote in 2014, “If you’re going to choose a place on the body to measure physical signals…two places are far and away the best: the ear and the rear.”6

The engineers and scientists at Starkey Hearing Technologies knew that the ear was a prime health monitoring spot when we started work on Livio AI, the world’s first hearing aid that tracks body and brain health.

That’s because the ear is a more stable surface, and is consistent with the movements of the rest of the body, whereas the wrist and pocket have ancillary movements. These ancillary movements (which are not step related), lead to false positive and false negative step calculations and thus, higher variability.

Also, hearing aids (like our Livio AI devices) are more likely to be worn longer and more reliably due to their multifunctional nature, and people are less likely to leave them behind during daily activities. Gaps in step count and “step-regret” are less likely due to power failures or forgetfulness with Livio AI vs. fitness trackers worn on the wrist or in a pocket.

Track your brain and body health with Livio AI

As the first hearing aids with 3D motion sensors and built-in artificial intelligence, Livio AI — along with the Thrive Hearing app — let you reliably monitor not only your steps and overall movement, they also measure actions that are good for your brain health, like daily usage of your hearing aids, social engagement, and time spent listening actively.

With Livio AI, taking charge of your health and your quality of life has never been easier. To learn more about Livio AI hearing aids or to try them risk-free for yourself, click here.