How hearing loss can lead to social isolation 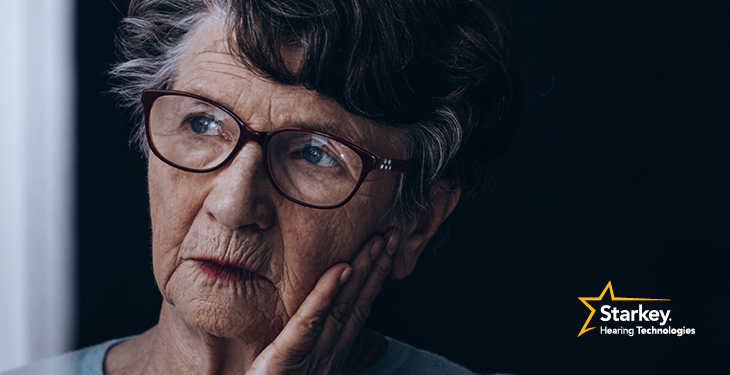 Helen Keller once said, “Blindness cuts us off from things, but deafness cuts us off from people.” While it can seem like a bit of jump from “I can’t hear” to “I am all alone”, the path is more straightforward than you’d think, particularly when you realize most people wait ten years, on average, to do anything about their hearing loss.

Let’s follow the path with a fictional but very representative “Betty Jones.”

Betty is 50 when her daughter goes off to college. She is at a highpoint. She just got a promotion at work, and is in a book club and card club with her lifelong friends. She has season tickets to the theater and regularly goes out for lunch and dinner with colleagues and acquaintances. Life is going great!

Betty is 52 years old when she first notices that she is missing things. At work, the people on the other end of the conference table seem to mumble. And when her daughter isn’t facing her, she misunderstands her more easily. But Betty can effortlessly explain all this away: people should speak up in meetings, and her daughter has always mumbled.

When Betty is 56, some listening situations have gotten worse. But in her opinion, it isn’t anything she can’t handle. Sure, she stopped going to her book club because everyone talks all at once and it gets so loud. And OK, she let her season tickets for the theater go because it’s too much like work to try and follow the plays and musicals. And yes, at work, the phones got harder and harder to hear ever since they installed the new phone system. But that has nothing to do with hearing loss, if you ask Betty.

Anyway, her daughter is getting married, so there’s no time to think about hearing loss.

At 60, Betty is running into challenges at work. The conference calls and meetings make her tired as she tries to follow all the overlapping conversations. So she reduced the number of meetings she attends, and chooses to focus on paperwork and solo projects instead. Most of her contact with customers is via email now.

Betty doesn’t see her friends as often either. She stopped card club because it’s too hard hearing the bids at the table. Her lunch group is still going, but Betty will only go if they pick a restaurant that isn’t too busy or loud.

For her 60th birthday, Betty’s daughter, son-in-law and three-year-old grandson came to visit. While at Betty’s house, her daughter noticed that she isn’t as outgoing as she used to be, and prefers to stay home rather than go out to eat or shop. She also noticed that her mom was turning the TV up and asking them all to repeat themselves more often — and that she doesn’t hear much of what her young grandson says, which is frustrating and sad for all involved. Betty’s daughter asks her about getting her hearing checked.

In the last 10 years, what happened to Betty? Her work and social life declined. Her relationships grew distant. She became isolated.

With hearing loss — because it progresses slowly — we adapt and don’t even notice that we have cut ourselves off. Sometimes it takes our family to first realize it. Sometimes, we wake up and realize what we have lost on our own. Too often, we don’t realize what’s happening until it’s too late.

Don’t be a Betty and ignore your hearing loss. There’s too much you could miss…too many ties that could unbind. Treat it before it’s too late.

Not sure where to find help? Call 1-888-908-1845 or click here and we’ll help you locate a licensed hearing care professional near you.