It took him years, but Jeff finally found tinnitus relief 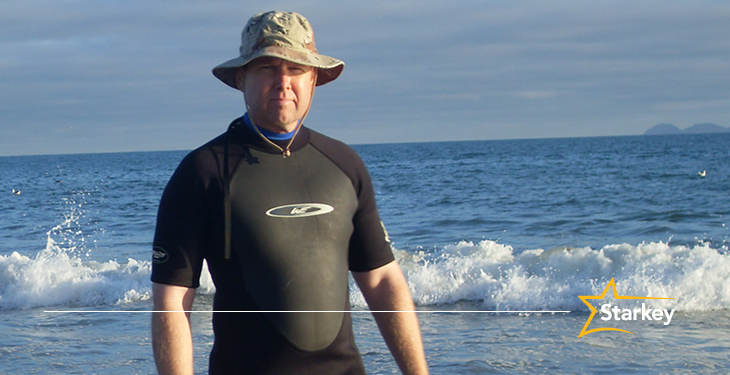 Jeff P. is a law enforcement officer who’s been living with tinnitus as long as he can remember. Five years ago, it got so bad he could barely sleep. After trying numerous treatments, none of which helped, he tried our tinnitus technology solution.

We recently talked to Jeff, and his wife, who wanted to tell their story in hopes it could help other tinnitus sufferers who were looking for help.

The following is a transcript of that conversation. Some questions and answers have been edited for brevity and clarity.

Let’s start with an introduction.

Jeff: My name is Jeff. I'm a law enforcement officer. I also did construction for a number of years with my father. I've played drums all my life; been in and out of bands. So I’ve definitely been exposed to loud sounds, noises, things like that.

Tell us when your tinnitus first started: how you noticed it and what it felt like.

Jeff: I've had it all my life. But up until about four or five years ago, it's something that's been more of an annoyance and nuisance. During the day when you have your ambient noise, hustle and bustle around you and you're busy and everything, it's not something that I really thought about because the tinnitus was fairly quiet.

But if I got into a quiet room, or when it became night and things quieted down and you're still, then it was noticeable. So I had always used something, like turning on a radio or turning on some white noise or using a fan or something to distract me and keep me from hearing the ringing — and until about four or five years ago, that sufficed.

How did it shift four or five years ago? What changed?

Jeff: I don't know what changed. I had not been recently exposed to any loud noises, jackhammers, gunfire, etc., but I was at home one day and out of the blue, like boom, it's like someone took the volume knob on the ringing and — if 10 is the max and it had previously been at a two — it turned it up to what seemed to be about an 11.

I mean, I don't know why. It just turned up; it was all of a sudden and I thought maybe it would go away in a couple seconds or something. But it didn't.

It was the same exact sound I'd had all my life, but for some reason, the volume just shot up and I don't know why. Plus, now it was there 24/7. It wasn’t just like, "Hey, I need a little bit of white noise at night." It was like, "I need some help and I need it bad!"

Did you try anything?

Jeff: Of course. I tried the so-called miracles in a bottle — that if you take this the ringing will go away. I've tried the different products and they never helped. And then I came to find out that — because of the kind of tinnitus that I have (pulsatile) — like many people, unfortunately it's not helped chemically.

Mine has also not been helped by chiropractic treatment or acupuncture, or stretching. It's not been helped by TMJ therapies, which can help people and can have a positive effect on certain individuals if that's what's causing or driving theirs. That's not what was driving mine.

In fact, as mine worsened, I even tried a procedure called intratympanic steroid perfusion. I'd heard that could possibly be a miracle solution for it. Unfortunately, it wasn't, so I've kind of tried just about everything that's out there.

So what did you do?

Jeff: Then, one day I was talking to an employee at the Shea Ear Clinic in Tennessee and he told me, "Hey, my wife tried these [hearing aids] and they seem to give her some relief. Maybe you might want to try them." And so, not wanting to leave any stone uncovered, with the help of that employee at the Shea Ear Clinic, I located an audiologist in my city who sold this tinnitus masking device.

I was skeptical at first, but I went in and tried a pair and from that moment on, my life has been changed in terms of the relief that it’s given me.

What was different about this tinnitus treatment?

Jeff: One reason why it works so well is because of these little tubes that sit right against your eardrum. They put the masking sound inside your head instead of outside, like other external noise maskers. If you don't have tinnitus you wouldn't really understand this, but if you do suffer from it you know that the sound is inside your head. It's different than being outside of you. You still describe it as "hearing it,” but it's more inside your head.

When you place the device in your ears, because it sits closer to your head, it's right on your eardrum and puts the sound inside your head where the ringing is — which is absolutely amazing!

Another wonderful thing about the device is that the white noise is asymmetric. So instead of a constant level of sound, it's kind of swooshing up and down, like ocean waves. But not only that, it's doing it differently, randomly, in each ear — which might make you think, "Hey, well, that's not a good idea." But when you hear it, you're absolutely blown away at how well it removes the ringing sound.

Another great feature about the device is that the white noise is tunable. The technology allows you to adjust the pitch of the swooshing sound to exactly match the pitch of the ringing you hear, which is another reason why this product is so effective.

How has it made a difference?

It's just unbelievable. Even though you're not cured and you know you still have the problem, it takes away so much of the worry and the anxiety and the dread because you know you can throw those things in, any time you want, and get relief.

And whenever I'm ready to go to bed I throw these things in and immediately the ringing goes away and it's replaced with the soothing swooshing sound, which is easy to habituate because you get so used to it. You forget about the swooshing and you're not even thinking about your tinnitus.

You're just back to your life as it was before you either had the problem or before it was devastating you.

Jeff: I would describe to them why it can help them. I would let them know of the different remedies and things that I've tried. Because, for me, if I can help somebody else, if I can change their life, that's an amazing thing.

They need to get down to their nearest Starkey provider, as quickly as they can. Get down there, and get these in your ears and it'll change your life.

If it's okay, my wife has experienced all of this with me and she wants to add her two bits to what I'm saying.

I’m Teri and my husband Jeff is a Type-A personality. So, because of what a go-getter he is, he didn't want to tell me when the raging tinnitus first happened; he was trying to fix it on his own. For a week or so I saw him acting strange, he was more agitated than normal. He just was acting differently.

And it got to a difficult point for him, where he said, "I can't look at this anymore. I've got to talk to you about it. This is what's going on. I need you to take on the research and figure this out."

He's not a Facebook user, but I am — so that's when I got onto Facebook groups, trying to see what people were talking about, what solutions they were finding.

So when we found this solution, which maybe took eight, nine months — I just didn’t know how there could be this great of a solution. And if there are other wives sitting there as desperate as we were and they're trying to help their family members, it's a big deal. It was life-changing for us.

[Jeff gets back on the phone]

Jeff: Like I said, I only wear them during the night, when I sleep. But it even helps me during the day, when they're not in because I know that I'm going to throw them in at night, and that gives me peace and comfort and that takes away that dread and worry.

And that's an amazing thing!