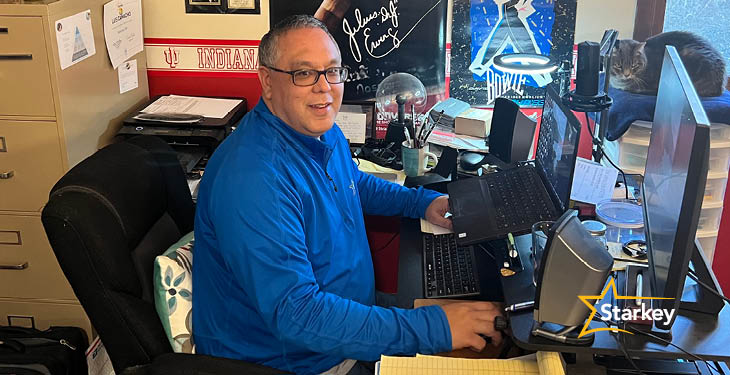 I had not imagined I would be spending the first day of 2021 in the waiting room of an ENT office. But, life is always ready to throw you an unexpected curve ball.

A few days earlier, I had noticed my left ear was feeling plugged and my hearing was dull and distorted. I was also very aware of a continuous high-pitched ringing in that ear. Being an audiologoist, I immediately recognized it as tinnitus.

Now, as an audiologist, you would think I would take immediate steps to investigate what was going on. However, as they say, “doctors are the worst patients.”

I put things off, thinking maybe it was a case of ear wax impaction, an ear infection or allergies. After a few days, I realized it was none of those. At that point, I contacted a friend who happens to be the head audiologist at a large ENT office nearby. She got me an appointment the next day and that is how I found myself waiting to have my hearing tested.

For once, I was the patient and not the clinician

Results of the testing revealed a mild high-frequency, sensorineural hearing loss in the left ear. The physician believed it was due to a viral infection (not COVID). The only treatment with any chance of success was an aggressive round of oral steroids to try and bring the hearing back to normal and potentially reduce the intensity of the tinnitus.

Success rates with this treatment range from 30-60%, with many people regaining some of the hearing. I agreed and began taking the steroids immediately. To be honest, I was not too concerned about the hearing loss; I did not notice much change in my ability to understand conversation. It was the plugged sensation and the tinnitus that bothered me the most.

Depression and isolation set in

In the following days, the ringing remained without any noticeable improvements, I became very depressed. All I could think of was the ringing. I struggled to sleep. I had difficulty concentrating on work.

I found myself in a negative feedback loop; I was stressed because the tinnitus would not go away which made me focus on the tinnitus more, which reminded me that it was not going away. Over and over this thought process occurred leading me into a spiral of stress and depression.

This is a common response to tinnitus; a feeling that things are out of your control.

As this was in the middle of the COVID pandemic, I was at home with my wife and two of my children. They noticed a dramatic change in my demeanor. Normally I am very upbeat. I joke around a lot and we laugh all the time as a family. They saw that I was becoming quiet and somewhat quick tempered. I had to have music or the TV on all the time in an attempt to cover up the ringing.

I spent more time alone away from the family. Luckily, we have a great relationship, and I was honest with them about what was going on and how I was struggling to deal with the situation. They supported me in every way possible. I am blessed to have them.

As the days went by, I did notice that the plugged sensation was subsiding. And, the somewhat distorted sound quality in my hearing was getting better. But, the tinnitus remained.

After consulting with my physician, I decided to try a different steroid treatment; injecting the steroid directly into the middle ear in hopes it would become absorbed directly into the inner ear. This entailed them making a small hole in my ear drum and, with me laying on my side, injecting the steroid through that hole into the middle ear. I would then have to lay in that position for 20 minutes while the steroid was absorbed into the inner ear.

This was done once a week over a series of four weeks. Not the most pleasant thing, but you do what must be done.

In the end, my hearing did recover back into the borderline normal range, but still not quite equal to my right ear. The plugged sensation was gone and that was a relief. But, the tinnitus remained. It was also in a state of fluctuation; vacillating between a high-pitched ringing to a low rumbling sound (I constantly thought there was some type of construction going on outside my house).

Open to any solution

I also began investigating other tinnitus therapies. I became open to any possible solutions.

I consulted a local acupuncture practitioner. She was positive she could help. So, twice a week, I lay on a table in a dark room with about 50 needles stuck in my head, arms and torso. I did this for about three months. Did it help? I am not sure. When I was in the sessions, I found relief. The sessions themselves were therapeutic. In hindsight, I think I was using the sessions more like meditation time and the acupuncture itself may or may not have had any effect on the tinnitus.

I also consulted a holistic physical therapist. He felt that by manipulating the muscles on and around my head I could potentially get some relief from the tinnitus. Did this work? Again, I cannot be 100% sure. But, like the acupuncture, I found myself enjoying the bi-weekly therapy sessions as a means of relaxation and mediation. It was like getting a good massage.

At the same time, I consulted the vault of information known as YouTube. Specifically, I searched for mediation/relaxation techniques. As you would expect, there are a multitude of videos on this topic. After some trial and error, I discovered a couple of channels that provided me with some fantastic meditation practices that I continue to use at bedtime.

Of all the approaches to tinnitus management, I found these mediation practices offered me a way forward to live with the tinnitus and accept the fact that it will never fully go away.

Why hearing aids didn’t work for me

Using ultra-high frequency headphones, we discovered my tinnitus to be a 12,000 Hz tone. She provided some guidance in how to adjust the hearing aid not to mask the tinnitus, but to blend it in with the tinnitus stimulus. The goal is to retrain the brain not to react negatively to the tinnitus, thus stopping the cycle of stress and negativity.

Over a month or so, we both concluded that the hearing aid was not really doing much for me. Because of my personality and in-depth knowledge of the hearing aid’s adjustability, I was constantly trying to adjust the hearing aid for the perfect tinnitus setting. I just couldn’t help myself.

The result was that I kept bringing my attention back to the tinnitus (the opposite of what I was trying to do), which was slowing down my attempt to acclimate to it.

A year later, I’ve learned how to live with tinnitus

That brings me up to today. A little over a year after its onset, the tinnitus it is still there. Some days it is louder than others. But, with some trial and error and the passage of time, I have learned how to manage my tinnitus. And, dare I say, live with it.

I adopted some healthier habits; reduced caffeine, started drinking anti-inflammation herbal teas, and I try to take a daily walk. I am also taking steps to protect my hearing from loud sounds, such as when mowing the lawn or attending concerts. I use Starkey’s Relax app, which features different sounds that help me relax while covering up the tinnitus. I also use one called “Calm” that has a variety of mediation supports.

I am happy to report that I am back to my old self and enjoying time with my family and friends. I am no longer depressed. I can focus on work. Most of the time, I do not even notice the ringing. When I do notice it, I am able to quickly redirect my thoughts to other things before the cycle of stress begins.

There is no cure for tinnitus — but it can be managed

My message to anyone who is dealing with tinnitus: Consult experts, both physicians and audiologists. Do some investigation of “non-traditional” treatments. Look into relaxation and meditation techniques. Rely on friends and family for support. Accept that this is an ongoing process. You will find what works for you to help you manage the tinnitus. Things will get better.

If you’re seeking relief from tinnitus, it’s recommended that you begin with a tinnitus and hearing evaluation from a licensed hearing healthcare professional. Not sure where to find a hearing professional near you? Type your zip code in here, and you will see a list of local providers who you can contact.

Want a week's worth of Starkey blogs delivered to your inbox every Friday? Sign up here