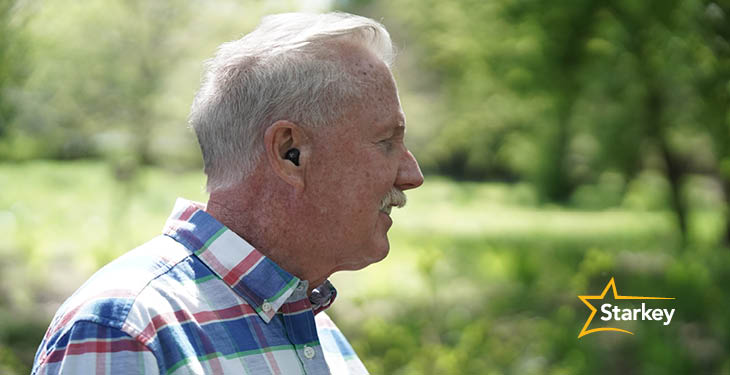 Tim Burt is a husband, father, pastor and long-time hearing aid wearer. Recently, he spoke with us for Men's Health Month about his hearing loss journey, and why he’s become a vocal advocate for treating hearing loss with hearing aids. Our conversation has been edited for length and clarity.

Tell us about your hearing loss story. You've been wearing hearing aids, you told me, for 25 years. Take me back to how you first noticed hearing loss and why you decided to get hearing aids.

Tim — "I've had hearing loss really since my early twenties and I could live with it and I could navigate pretty well. But by the time I started to be around 40, my hearing loss was becoming more severe and I was in an executive role and had to participate in very important meetings and was struggling to hear the kinds of things that I really needed to hear.

And I suppose, like a lot of people, I felt like I was way too young to be wearing hearing aids. But it was a matter of being able to do my job or not. I talked to my wife about it. She was delighted that I would think about wearing hearing aids because then she wouldn't have to suffer repeating herself all the time. So I eventually searched around for hearing aids, heard about Starkey and that's where my adventure with hearing aids began.

You say that when you were 40 you thought you were too young for hearing aids, but your wife had no problem with it?

So between having hearing loss at 25 and getting hearing aids at 40, how were you able to cope?

Tim — Well, anybody with hearing loss has a lot of coping things they do. They pretend that they hear a lot and they probably have a small portfolio of responses that are very generic and that they can get away with. But oftentimes you walk away from a conversation and ask your friend or colleague, “What did they say back there?” And then, of course, there's the, “Would you mind repeating that?” So those were all employed in my arsenal to get by. But it was becoming more obvious to everybody that I was missing things. So I just couldn't do that anymore.

Other than work concerns, were there any quality-of-life challenges that your hearing loss caused?

But sometimes you can feel a little frustrated. I think sometimes there can be anger issues back and forth. And I read a lot about all of that and all of the things that can create problems when you don't deal with your hearing loss. And I did not want to be that to my family. So that was another really good reason. And my family was delighted when I got hearing aids because they didn't have to repeat everything all the time.


Tim explains the many things he likes about his hearing aids.

You told me you’ve been wearing hearing aids for 25 years and have gone through five different sets. But recently, you switched to our newest hearing aids. Give me your quick, initial reaction to them.

Do you think the sound quality is different than your previous hearing aids?

Tim — Actually, the hearing is better. I always thought it was great, but then when you experience something better, you go, wow, it's even better. It feels so natural. It just feels like my own hearing. And the clarity of me being able to hear everybody and know what they said and not have to repeat themselves is just amazing.

Compared to past hearing aids, are these ones easier or harder to use?

Tim — Well, you can buy very simple versions of hearing aids. Like I said, all they do is they just increase the volume and that doesn't help people most of the time. But now they're making hearing aids like my hearing aids, that — along with the Thrive app — stream my telephone calls and stream my music right into my ear. It's absolutely amazing because anybody with a hearing loss will tell you that speaking on the phone is their worst nightmare. And now it's absolutely just a delight. I can hear my phone better than I think my wife can, listening on her phone.

Do you think — if you weren't able to use the app — you would still like these hearing aids?

Tim — If I wasn't tech savvy and I got these hearing aids, I would still love them because they're set by my hearing professional at the hearing aid level that I need. And in 99% of all situations, they work perfectly. If I never use my app and I never used it for anything else, I would absolutely love these.

But, the app helps me navigate other situations like my television set. So now my television set comes straight into my ears and that app allows me to get a volume that works for me. And then I don't have to mess with it anymore. And sometimes, like if I go in a very noisy restaurant, I've now created a setting with a volume for that, that works better. And so those are some of the advantages that I can do that I never could do before.

We talked a little bit about the stigma you had at 40 of wearing hearing aids. Do you think that stigma is prevalent?

Tim — I've always known that there's a stigma with wearing hearing aids because I had them at a very early age. So when I was wearing them in my forties, I'd often have people that were 50 and 60 — they'd heard that I wore hearing aids — and they'd secretly ask me about them and if they helped me. And I'd ask, “Well, is there any reason you wouldn't get them if you have a hearing loss?” and I would hear back a lot, “I really don't want to wear a hearing aid. I don't want to look that old yet,” or whatever. And I just tell them, the stigma is something that's there for two weeks. And then it just goes away and you never think about it again. And you're so happy you can hear.

So I think there's always been a stigma with it, but there's more people wearing things in their ear, and if companies keep making them look more modern and a part of everyday life, I think that stigma will go away.

I often talk to people who get hearing aids and so many say, “I wish I would've done this a long time ago!”

Tim — I think that if you're thinking about hearing aids, you're probably having hearing loss that's significant and affecting you in ways that you've thought about for a while. So then to continue to think about it — rather than just do something about it — I’ve never understood.

And so, I am a hardcore advocate for dealing with your hearing as soon as the loss is at any level of significance where you're repeating yourself all the time, or you're missing things.

Finally, if there was someone on the fence about getting hearing aids, what would you say to them?

Tim — Well, you know, if somebody was asking me about hearing aids today and they're on the fence, I would be telling them about how far the technology has evolved and how, for a lot of people, it's like experiencing a miracle. All of a sudden you can hear things you haven't heard for years. That's a problem for the first month or so while they have to get used to all the sounds that they haven't heard for so long. But then after that, it's just incredible that they can hear again. It almost feels like a miracle.

And then, science-wise, I’d tell them there's a lot of health issues that come from not being able to hear well. And so, there's more and more and more knowledge about that out there. I don't know if it's Alzheimer's or dementia, whatever, but hearing loss can participate in the acceleration of that. So that's not good. And then I talk a lot about, you create dysfunctions when you can't hear. You're not being your total self. You start to isolate more and more. Sometimes it leads to anger issues and on and on and on. And why go through any of that unnecessarily? You don't need to. Improve the quality of life and you will be so glad you did."