Treating hearing loss can be good for our brain health 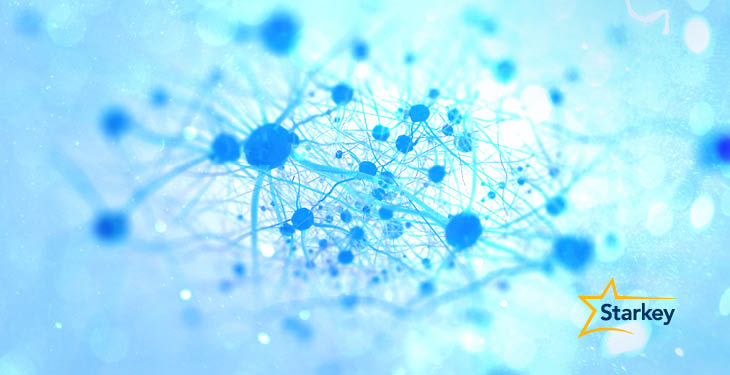 Every June, the National Institute on Aging (NIA) celebrates Alzheimer’s and Brain Awareness Month. The goal is to raise awareness about Alzheimer’s, a dreaded disease that — according to the Alzheimer’s Association — effects more than 6 million Americans (and that doesn’t include the millions more who care for and about them).

Maybe younger generations need the awareness reminder. But for Baby Boomers and Gen Xers, brain health issues like Alzheimer’s and dementia are already top of mind, as anyone above a certain age likely worries about or knows someone with cognitive decline.

There is a link between hearing loss and cognitive decline

If avoiding dementia and Alzheimer’s disease is on your list of aging goals, here’s something to remember: research has shown that untreated hearing loss increases the risk of dementia by 50 percent!

That means hearing loss — and how we deal with it — plays a big role in our ability to stay mentally sharp as we age.

For a long time, experts have known that social isolation and loneliness increase the risk of Alzheimer’s and dementia (along with many other physical and mental health issues).

And guess what can increase your risk for loneliness and social isolation? Yep, untreated hearing loss. This makes sense, of course. If you struggle to hear, you’ll be more likely to withdraw from social activities or situations where hearing plays a role. At Starkey, we often hear from people who stop going out or engaging with people like they once did because hearing loss made it less fun or more challenging.

As hearing becomes more difficult, your brain has to work harder to register and comprehend what you’re listening to. This steals energy needed for memory and thinking. Scientists refer to this as the “cognitive load theory.”

Imagine your brain as having a finite amount of fuel. As hearing loss increases, you use more “fuel” to make sense of what you’re listening to, leaving you with less gas for tasks like memory and decision-making.

Yes, believe it or not, our brains shrink as we age. But researchers at John’s Hopkins found that people with impaired hearing lost more brain tissue per year than peers with normal hearing — likely due to atrophy from lack of stimulation.

The big question, then, is can treating hearing loss prevent cognitive decline? No research has proven that yet — though Johns Hopkins University is currently undergoing a controlled trial — but two studies strongly suggest it may help.

A 2017 study — updated in 2020 — was equally promising. The study, conducted by The Lancet Commission on Dementia Prevention and Care, concluded that managing or treating hearing loss in mid-life is one of 12 things you can do to help prevent dementia. And — more importantly — was the number one risk factor you could modify to “reduce the incidence of dementia or substantially delay its onset.”

In fact, researchers suggest that hearing loss treatment could prevent up to 9 percent of the 47 million dementia cases in the world.

Wearing hearing aids is the most effective treatment for hearing loss

This link between hearing loss and cognitive decline — and the studies above — are exactly the type of awareness the NIA hopes to bring to brain health this month. It should also give everyone added incentive to treat hearing loss and not ignore common hear loss signs.

Our Evolv AI hearing aids were specifically designed to help people treat hearing loss and achieve better cognitive health. That’s because, in addition to being our best sounding and best performing hearing aids, they’re the newest in the first line of hearing aids that can measure and help encourage social engagement, which goes a long way to keeping us mentally sharp as we age.

If you’re ready to treat your hearing loss and take proactive charge of your cognitive health, we can help. Simply type your zip code in here and you’ll generate a list of local hearing professionals and audiologists who you can reach out to for a consultation.