Could earwax be causing your hearing loss? 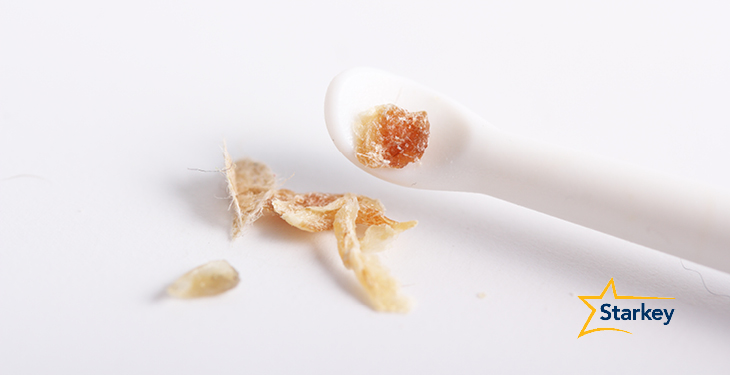 Since earwax seems to be on everyone’s lips these days…wait, let us start that one over, please.

Since earwax seems to be a popular topic these days (don’t ask us why, but earwax cleaning videos are trending on social media), we thought now was a good time to answer this FAQ.

Can earwax cause hearing loss? A lot of things can cause hearing loss. Noise exposure. Aging. Certain medicines. And yes, too much earwax. But earwax alone is rarely the only cause of one’s hearing loss. In fact, very few people who are seen by hearing healthcare professionals have hearing loss that is literally due to cerumen impaction (the clinical way of saying “excessive earwax”).

Soundwaves only need a tiny opening in the ear canal to reach the eardrum. Thus, even a lot of earwax shouldn’t cause noticeable hearing loss.

If, however, the ear canal is plugged tightly with earwax, and cerumen impaction is severe enough to cause hearing loss, there will most likely be other signs and symptoms noticed before the hearing loss — such as dizziness, ear fullness (the feeling of plugged ears), itchiness or pain or ringing in the ears.

Rarely does total cerumen impaction happen. And if it does, rarely does it occur without there being additional signs that “something is wrong”.

Why total earwax blockage is rare

A big reason why cerumen impaction doesn’t happen very often is because our ears mostly clean themselves, and — if left alone — will prevent earwax from accumulating to the point of total blockage.

Still, as with most things, never say never. Certainly, there are things that can cause earwax blockage — such as incorrect use of cotton swabs, advanced age, narrow or abnormally shaped ear canals, or using ill-advised methods to clean the ears. Typically, it is something that affects the normal outward flow of earwax.

In the event you notice one of the signs that “something is wrong” or you just have reason to believe you have too much wax in your ears, a visit to a medical professional is recommended. Most hearing professionals can perform cerumen removal in their office. Many doctors, too, can remove excessive earwax. (Please do not stick anything in your ears to clean them yourself!)

Not sure where to find a hearing healthcare professional near you? Problem solved. Just call 1-888-908-1845 or type your zip code in here, and we’ll give you a list of local providers ready to help.